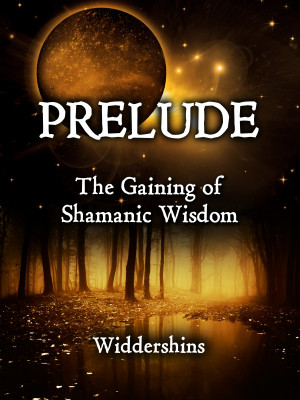 What happens when a woman meets a giant statue of a cat, two Volcano Goddesses, her ancestors, Spirit Allies, Elemental beings, and has a whole lot of really scary and weird adventures?
Part memoir, part Shamanic adventure, part guidebook, Prelude is the story of my quest to confront my monsters, uncover my true Name, and understand that I lived in just a tiny corner of a much vaster Cosmos.( More
Shamans come in all shapes and sizes, from all walks of life, from all the continents of the Earth. We've been around since the human race realized there was more to existence than just the physical, and we'll be around long after the last star has died, when the Wheel turns to renew All.
Becoming a Shaman is not for the faint-of-heart, or the timid-of Spirit. It is not an easy Path, nor should it be. The responsibilities are great and require harsh testing before one is judged capable of shouldering them.
There are many Pathways to becoming a Shaman, and I came to understand mine through my Earth-based, Goddess Spirituality, She who is the First Mother of Us All, in all Her forms.
'Prelude' is the story of my very first steps along that Path. It is part memoir, part Shamanic adventure, and part guidebook, with a dash of dire warning on the side.
From the moment I came across a giant statue of Bast, I knew my life would never be the same. There were times I froze, bled, burned, raged, and cried. My life, my past, the shadows, and the shining moments, all the things I believed defined me, were challenged, until nothing but a truth, my Truth, remained.
Join me as I confront my monsters, discover my true Name, and come to understand that the Physical world I grew up with was just a tiny corner of a much vaster Cosmos.
Available ebook formats: epub mobi pdf lrf pdb txt html
First 20% Sample: epub mobi (Kindle) lrf more Online Reader
pdb
Price: $3.99 USD
Buy Add to Library Give as a Gift
How gifting works
Create Widget
Tags: spiritual transformation goddess spirituality widdershins shaman spirit journeys shaman wisdom shamanic journeys shamanic memoir spirit allies and adversaries woman shaman lesbian shaman
About Widdershins

I was born in England on a crisp autumn eve in 1958, emigrated to Australia at the tender age of two, and moved to Canada in 2004 where I married the love of my life. I left school when I was fourteen, and thereafter continued my education via libraries, books, and whatever Life decided to throw my way.
I’ve tried, and succeeded, (and failed) at many things in my time on this little planet we call Earth, and I’m sure that before I leave this mortal coil I shall joust with many others.
I’ve ridden a bicycle down a hill so steep all I could do was hold on and scream with sheer exhilaration. (and terror) I’ve sweated under a burning sun to plant seedlings in dusty fields. I have a long-standing relationship with sewing machines, starting with an old Singer treadle machine when I was barely tall enough to reach the pedal. Once upon a time I went to university and studied Architecture ... it didn’t take. I had a dream of athletic superstardom, but a motorcycle accident stopped that rather abruptly.
Above all, writing is my passion and my profession, novels specifically, short stories occasionally, and always with lesbian characters.
I adopted 'Widdershins' as a username in the early days of the interwebz, and it stuck ... because I am, if nothing else, contrariwise.
I blog about all things Widdershins-and-writerly, at Widdershins Worlds and can be contacted through the links on my About Me page.
-oOo-
Widdershins, as Writer:
One day, late in my high-school career, in order to avoid writing a very boring science essay, I turned in a short science fiction story instead. It incorporated the information in the essay, but in a much more readable form. (in my humble opinion)
When I handed it in I caught a glimpse of my teacher's face as she started reading it, she'd turned rather pale. I discreetly exited the room before her ability to speak returned. As I fled I heard a bark of what I hoped was laughter, but it could've been an incipient heart attack. Only time would tell.
Upon receiving the marked essay back I saw the following scrawled across the top. 'Don't ever do this to me again.' Somewhere in the middle was a, 'Well Done.' In the bottom left-hand corner was a very large red 'A'.
That was the moment my career as a writer began.

Reviews of Prelude by Widdershins

You have subscribed to alerts for Widdershins.

You can also sign-up to receive email notifications whenever Widdershins releases a new book.