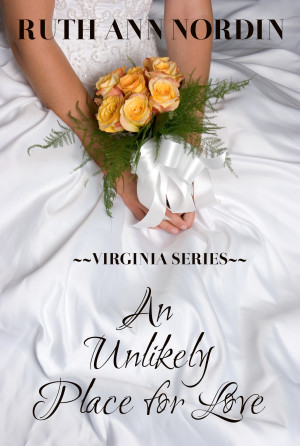 An Unlikely Place for Love

Rated 5.00/5 based on 8 reviews
Fleeing from her parents' killers, Kate Tanner disguises herself as Billy Ingram and works on a remote farm in North Dakota. Between trying to prove that she can handle the more demanding farm chores and trying to fit in with the other farmhands, she has her work cut out for her. Then, one morning, her boss discovers she's a woman, and that's when things really get interesting. More
Kate Tanner is getting more than she bargained for in this "woman disguised as a man" romance. Fleeing from her parents' killers, she disguises herself as Billy Ingram and leaves the big city Virginia life to work on a remote farm out in the middle of nowhere, North Dakota where the handsome, but aloof, Chad Walker hires her as a farmhand.

Between trying to prove that she can handle the more demanding farm chores and trying to fit in with the other farmhands, she has her work cut out for her. Then, one morning, Chad discovers she's a woman, so she quickly makes up the excuse that "Billy's" sister, Kate, decided to come by for a visit.

That's when things really get interesting. Lacy Montgomery is in love with "Billy" and nothing disgusts the woman. The farmhands are in love with Kate. She's in love with Chad who may or may not love her back. Her brother, the real Billy, shows up and she's forced to don on another female disguise to ward off Lacy altogether.

About the Series: Virginia Series

This is mostly a romantic comedy series, thought The Cold Wife is on a serious note. Happy endings, though, are a guarantee.

One of my favorite Authors. Not just for this book, but also for many that she writes for the rest of us Authors.

This effort is right in line with rest of her books.

This is definitely one of my favorite authors. I already have multiple books downloaded to the nook application on my phone. I am so glad to see some of her work on this site!!

To Annette- Cell phones were still not common in the late 90's. At least not in rural places. I lived in Arkansas in '97 and the few people that had a cell phone didn't get that great of service and the pricing was out of this world. So please actually look at not only the time period but also the location. I understand that this girl was rich but sometimes only a pager was necessary. But pagers still had the same problem. I still look at TV shows from early 2000 and they tend to use more pagers and the corner phone booth than cell phones. The whole virgin line I can totally see that happening. I have uttered that same line in front of others myself when I was still a virgin. I wasn't ashamed of it, I glorified in that simple fact myself. Please do not put your actions on someone else. That is rather juvenile to think that everyone should act, speak, walk, and pretty much be the same. As for the heroine in the book. Have you never heard the phrase, "hiding in plain sight." Sometimes it is best to change a little about yourself and still hide out in plain sight. No one expects it. How many times have you lost your keys and when you found them they were in plain sight? As for the whole town talking about a deceased person, well it has happened. I think I have pointed out that I lived in Arkansas. Well let me put it to you in clear terms small towns gossip about everyone, reminisce about those who have passed on and they are really into everyones business. 10 years to go on about a dead person is not that bad. The civil war was 150 years ago and people in the south still talk about their family members that fought in the war. So yet again if you have never experienced any of this before then please do not put your judgements on what you do not know about.

Back to the novel. The town does remind me of where I grew up, but only I lived in a southern community. Well done! Keep up the good work!

(reviewed 8 days after purchase)
Annette B reviewed on July 4, 2011
(no rating)
This was awful. The first line is "June 1997" and shortly thereafter, the main character is getting off an Amtrak train. Despite the date given, people in this story ride horses to get where they're going. For entertainment, the town has horse races, potlucks and square dances. What exactly are "prairie clothes"? And why does no one in this story, even those who are wealthy enough to have 'servants', not have cell phones, pagers or just use regular phones in 1997? Instead, multiple people just appear, traveling from out of state unannounced. Everything in this story would have been more appropriate set at least 70 years in the past.

The beginning makes it clear the main plot is the murder of the main character's parents. She witnesses this at night, rides off on a horse and goes to one of her brother's homes, the one who lives further away. Must've been a really fast horse and a full moon. I understand she is supposed to be terrified for her life, but who the heck would just demand to get taken to a shop without mentioning "hey, our parents are dead". She manages not to think about her parents or their murder for a good portion of the book.

The characters are shallow, immature and generally lacking intelligence. What kind of adult throws cats off a roof to cause a distraction, because they are jealous? Who stays with a spouse who is a psycho, manipulating shrew...for a decade? I found it a bit odd that a grown woman would just blurt out "I'm still a virgin!" to her brother. EWWW. What kind of person thinks (this is the gist) "I've seen my brothers shirtless and didn't react this way..." double EWWW! Why would an entire town CONSTANTLY bring up someone's deceased spouse? Why would an entire town worship someone just because they were so very sweet and pretty. It was silly, trite and unrealistic.

The main female was half spoiled rich girl and half hard working, astonishingly perceptive and innocent. She's scared and trying to hide...but wants to talk to everyone. She just witnessed her parents murder, ran for her life and she wants to win a horse race! The male was a grouchy wimp that let people walk all over him for years. He even advised others to let jerks take advantage because it was easier.

Conversation between characters was bad, and male characters were constantly described as "he's a good man", so often it became ridiculous.

This story had issues on all levels. I'm disgusted I wasted money on this, especially after reading the great reviews here...did they read the same book?

Oh My! This was so very fun to read! I kept my hubby awake when I kept laughing out loud! Well worth you money and your time!

charming, witty, and romantic story. Full of Chuckles and suspense. I really enjoyed this story.

(reviewed 24 days after purchase)
jaimegirl reviewed on July 15, 2010
(no rating)
Such an amazing story! I stayed up all night reading it and now its almost nine in the morning and I have yet to go to sleep! The characters were so well rounded out and I never expected to feel such hatred towards a dead woman, but here I am cursing Georgia's name. I loved the comedic tones in this story and the friendship and romance was heartwarming. Definitely worth a night of no sleep to read.

(review of free book)
lind reviewed on April 4, 2010
(no rating)
Enjoyed the characters and the storyline. Well done