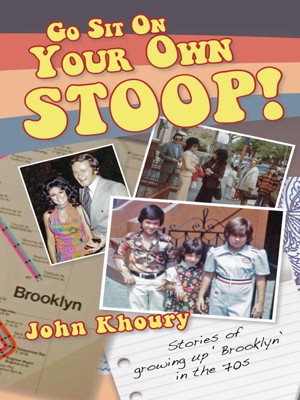 Go Sit On Your Own Stoop!

Author John Khoury transports you to a time when Brooklyn was defined by working class laborers, rampant crime, dirty streets and an inextinguishable character and spirit that was known around the world.

Go Sit On Your Own Stoop! is a unique memoir that explores the days before outdoor cafes; family playgrounds and wine bars; when your mother didn’t know or care where you were until dinnertime; when fire hydrants were used for cooling off on the hottest summer days; and when neighborhood brownstones were filled with three generations of family.

John Khoury was born in Bensonhurst in 1967 and moved with his family to South Brooklyn a few years later. Instantly captivated by the stunning brownstones, omnipresent smell of freshly baked bread and the neck-snapping sight of crotchety old women returning from the butcher dressed in nothing but smocks, pink curlers, and a lip-dangling Pall Mall, he realized this place was something special and its influence is what fuels John’s accounts of his time there in his upcoming book, “Go Sit On Your Own Stoop!”

John spent his recent years developing an admirable career at AMC Networks, where he’s been since 1987. As Director of Production Services, Mr. Khoury has established himself in television broadcast operations and is responsible for the preparation and transmission of all AMC Networks programming, including Mad Men, Breaking Bad, The Walking Dead and Bridezillas, 24 hours a day, 365 days a year, to well over 100 million homes in the US!

Famed among staff and friends for his Brooklyn-themed anecdotes, their reactions were always the same; “You should write this down!” So he did, but it went no further than a manuscript shared with friends and family.

It wasn’t until his mom passed away in 2009, when he found the manuscript of the book by her bedside as he cleaned out her apartment, that he decided to publish his work. That moment was the beginning of what has been an amazing and very fulfilling journey, whose end result is a memoir of charming, compelling and historically interesting stories about Brooklyn in the 1970s and 1980s.

Reviews of Go Sit On Your Own Stoop! by John Khoury

This is an amazing book... Mr. Khoury presents an amazing written experience that will invigorate anyone who gre up in Brooklyn... or wishes they did!

You have subscribed to Smashwords Alerts new release notifications for John Khoury.

You have been added to John Khoury's favorite list.

You can also sign-up to receive email notifications whenever John Khoury releases a new book.