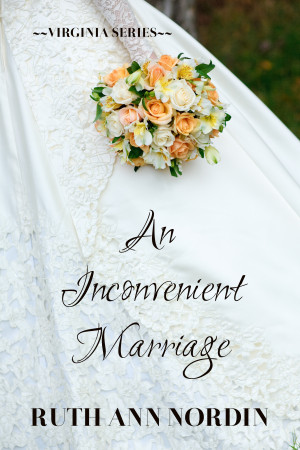 Unfortunately for him, the people he knows are determined to keep them together. Between an army of suitors willing to court Sue before her annulment and the Lewis brothers scheming to show Jake how attractive she is, laughter and love are in the air. And in the end, a confirmed bachelor might discover that an inconvenient marriage may not be so inconvenient after all.
Available ebook formats: epub mobi lrf pdb
First 20% Sample: epub mobi (Kindle) lrf more
pdb
Price: $0.99 USD
Buy Add to Library Give as a Gift
How gifting works
Create Widget
Tags: romance love comedy marriage humor sex historical wedding bride groom scheme
About Ruth Ann Nordin

About the Series: Virginia Series

This is mostly a romantic comedy series, thought The Cold Wife is on a serious note. Happy endings, though, are a guarantee.

Reviews of An Inconvenient Marriage by Ruth Ann Nordin

(reviewed 5 years after purchase)
Amy Given reviewed on July 9, 2013

I loved this romance book. The writing was so good that it really made me feel like I knew the characters in the book. I highly recommend this book.

Jake needs a wife and Sue needs to save her family farm. He's a snob and a she's a tomboy. Both quickly discover how much they have in common. An Inconvenient Marriage is filled with humor and playful banter. It will leave you with a smile.

Loved this book by Ruth Ann Nordin:-) I really like her humor and easy to read writing style...will definitely buy more of her books!

This book was so much fun to read and even though it took me a while to start(as I had other books to read) I could not put it down once I started.
Sue and Jake were something else and the fun of their friendship and trips was contagious. GR8 read

I am so very glad that I listened to a recommendation about this book as it didn't disappoint!! There is so much humour in this book. I loved the alternating male and female P.O.V.

I have to read the other books centering around this group of people. I'm now hooked on Ruth Ann Nordin :-) She has single handedly brought me back into the romance(with no paranormal in sight)genre!!

I enjoy reading books by Ruth Ann Nordin. She has a great sense of humor and an easy writing style. I've read the other reviews and they covered it beautifully. I was looking for a certain romance style, and I really found it in Ruth's books. I've read them all, and I'm waiting, impatiently, for more!

I enjoy all of Ruth's books. I read this as the historical but Ruth has just rewrote it as a contemporary book.

Sue Lewis comes into the bank each day and nags them to help her family save their farm instead of having it repossessed. Jake Mitchell, a wealthy bachelor, is being driven nuts by this nagging woman. Although he does want to help her but the son of the banker would rather get the property and make more money.

Jake wants to start his own bank as he knows when George takes over the bank after his father, Conrad, retires it won't be a good thing.

Jake's dad left his mom and him when he was 10. After his mothers death Jake gained much wealth. Now he is told that his father has died and left even more money but Jake must marry and stay married for 6 months before receiving the money.

He decides that he can marry Sue and give her the money to pay off the debt for the family farm. The marry as a convenience only and plan on an annulment on May 21st, six months later.

Jake finds out there is much more to Sue then the nagging woman he first assumed her to be.

(reviewed the day of purchase)
Donna McDonald reviewed on May 10, 2011

I am not normally a fan of stories with historical settings, but was so caught up in these characters that I forgot and had to have the whole book. Nordin does a wonderful job making you care about what happens to both the hero and heroine. This author definitely leaves you wanting more after the book is done.