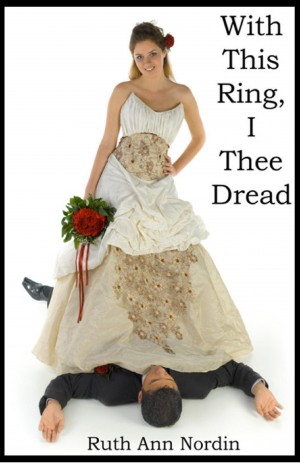 With This Ring, I Thee Dread

Rated 4.70/5 based on 10 reviews
Ryan Jackson and Elizabeth Valentine can't stand each other. Unfortunately for them, their parents get along great and decide to play matchmaker in a very unusual way. In order to keep their jobs, they will have to get married and spend four months in a remote Alaskan cabin. They accept the terms but are determined that their parents' ruse will never work...until Ryan changes his mind.
Download: epub mobi (Kindle)
Price: Free! USD
Add to Library
Create Widget
Tags: romance love comedy marriage humor contemporary stranded alaska bride groom
About Ruth Ann Nordin

About the Series: Omaha

Cute and funny contemporary romances where unlikely couples find a happily ever after ending.

Reviews of With This Ring, I Thee Dread by Ruth Ann Nordin

The best work of this author I guess. Thoroughly enjoyed it. The last intimate scene is kind of forced by author I feel. I Guess the author feels those kind of scenes are necessary to hold the interest of the reader. But I felt that the story could have been more unique if that is not the case. One kind of story which flows naturally. appreciate it.

a really lovely story..thoroughly enjoyed it.

A nice and easy paced book. i loved how Rayn nd Elizabeth worked out there difference.

(review of free book)
angie McGee reviewed on June 3, 2011
(no rating)
A slower paced story compaired to some of Mrs. Nordin's other story. Seems that it takes 200 pages to build the plot but only 20 pages to get to the romance in the story. I did like the book but really was slow moving. Possibly there should be a story about the robbers. It was really sweet of them to have a meaning to their robbing.

I would like to see what happens to those silly so called friends of his. At some point they should grow up. Possibly turn on each other for the sake of love????

I am excited about reading Brave Beginings. I read the prelude to the book and excited to read what happens to the rest of the story.

With This Ring, I Thee Dread is a fun contemporary romance. Ryan Jackson is a successful advertising executive at his father’s company. His life is great, if you discount he airheaded bimbos his friends Zac and Benset him up with for dates. That is, until his parents arrange a marriage for him – with his arch nemesis Elizabeth Valentine.

Elizabeth spent her school years teased and tormented by Zac, Ben & Ryan. Now a grown woman, her past has led her to be harsh and guarded, especially when it comes to men. So, when her parents announce that she’ll be marrying – and “enjoying” an isolated four month honeymoon with Ryan, her temper flares.

Forced to marry or lose their jobs and inheritance, Elizabeth and Ryan are stuck together in a cabin in the Alaskan Wilderness. What promises to be a miserable time, slowly softens into something more enjoyable as the weeks pass. The pair learn that their shared past isn’t what they thought it was, and learn to see one another in a different light.

At a glance, Elizabeth sometimes seems to be a harsh woman, but if you put yourself in her shoes and imagine that you’ve been forced to marry one of your tormentors from high school, would any woman be different? If anything, she is more forgiving than I would be.

Like Ruth Anne Nordin’s other books, this was a fast, smooth and enjoyable read. Ms. Nordin does an excellent job of executing humor in just the right places. Some of the funniest moments are the “man bashing” talk show that Ryan watches. She also adds suspense when a pair of bank robbers, on the run form the law, stumble into Elizabeth and Ryan’s neck of the woods.

If you’re looking for a fun, entertaining and romantic read, then this is the book for you!

I got a kick out of this story. Ms. Nordin does a great job with characterization. The two main characters are real, quirky, humorous, and likeable.

It was a cute story from start to finish. The only thing I would suggest is a little more research on Alaska. There were a few incongruities, but those were minor in relation to the story.

Overall, it was a good read.

I loved this book the best out of all Ruth Ann Nordin's books that I have read so far. I do agree with Ms. Maahs that the start was a little slow, but it gradually became very interesting.

It was funny and engaging. I think this book would help guys know the answer to the ultimate question, "What do women want?" The answer's really very simple, guys!