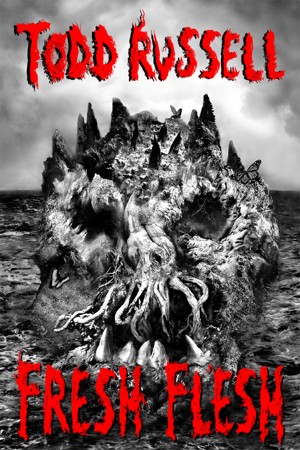 By Todd Russell
Rated 4.11/5 based on 9 reviews
The ocean surrounds the secret.

Last night a wicked storm swept a beautiful sacrifice onto the shore.

Shipwrecked Jessica Stanton is about to be discovered, cherished, and trained to survive on a remote island by a man who is not what he seems.

There is a place on earth where unrestrained evil flourishes.

His debut novel, a psychological thriller / horror story entitled Fresh Flesh was published September 29, 2011. He is working on several other books.

Not quite what I was expecting from the blurb, but a very good first novel. Some scenes are outstandingly well-written (our introduction to Torque springs to mind, you can feel the madness burning through your screen), and all-in-all it was unputdownable.

Like others, I also felt that some of the characters were a little flat, but I read it (and visualised it) as an action/horror movie, so that's hardly unusual for the genre.

If action/horror movies appeal to you, you'll definitely like this.

I received a copy of this book in exchange for an honest review through a read and review group on Goodreads.

I couldn't breathe normally while reading this book. The pacing and buildup of suspense was done in such a way to make you question your own sanity. It was written so well with the language used in such a way as to awaken your fears and make you want to hide under the covers and/or leave your light on all night. I opted for hiding under my covers. ;)

Deliciously terrifying and mysterious, the book was so surprising, which kept me turning the pages. It wasn't anything like I was expecting, and I loved it. I never wanted the story to end. The characters were such a motley crew--people you definitely wouldn't want to meet down a dark alley! The more I learned about them, the more frightening they turned out to be. Even the location of the story is frightening!

I'm thrilled to see the author is writing a second "flesh" book. I'm definitely getting my hands on that one!

This book gave me the willies. AT the same time this book wasn't scary so much as creepy.

Jessica gets washed up on this island in the middle of the ocean...okay not that far off but a good 400 miles from the nearest civilian. She encounters this lone man -Richard or rather Dick -who teaches her her how to live off the land. After about two months she finally hears the truth about this island. And that is where it gets creepy.

Just image a lone women on a tiny island with about 5 serial murderers who haven't seen a women in years! Yea recipe for disaster. Plus *whispered* I think the island is alive!! *end of whisper* I know right! I think the island takes these convicts, the blackness of their hearts and just turns them insane. Others like Jessica and Richard, who are good souls at best, get tangled up in the mess and go through h*ll but still manage to survive the insanity.

Overall if you want a not-so-scary-but-still-creep-you-out book to read in the dark this is one of those that you should read :)

I was able to read this for free through GoodReads. Thank you!

Another great free novel from Librarything. I love their member giveaways that help me to discover new authors through reading their debut novels. I am not generally a horror reader but this book has opened my eyes to how good they can be.

Fresh Flesh is a good, actually great. debut novel. It is a horror story that kept me anxious for more of the story. I liked almost all of the story. The only part that seemed unnecessary was the parts dealing with the dirt. The dirt was a minor player throughout the story (Sar's part) that I felt the ending tried too hard to incorporate the dirt as an integral part of the story.

I enjoyed the characters and the flashbacks that described their past transgressions and why they were on the island. This writing style allowed for more depth and understanding of the characters and made them more interesting. I did find the ending to be a bit sad as I was pulling for the main character.

Mr Russell has talent and has done well in his first novel outing. He has gone the extra mile to have beta readers, proof readers, has paid for sleeve art, etc. This book is recommended for all and especially for horror genre fans.

With a name like Fresh Flesh, I must admit that I was expecting a zombie story. Instead, Fresh Flesh is a modernised pulp novel, possibly best described as a cross between Battle Royale, Lord of the Flies and the Texas Chainsaw Massacre. And possibly a bit of Lost as well. A wealthy man and his wife are sailing towards Hawaii when their ship capsized, resulting in the death of almost everyone on board. The wife washes up on the shore of an island and is tended to by a man named Richard, who has been trapped on the island for several years. But they aren't alone on the island, and the island has secrets.(But not zombie secrets. Just government project ones.)
In a surprising move for an action based novel, I could follow every move, and keep a clear image of what was happening where (usually it's a bit jumbled). The characters are a bit simplified, but that may be why things were so easy to follow. Descriptions are detailed without being ridiculous, and just enough background is offered on the islanders. The woman in the tale, however, is kind of irritating in that she is flat - her reactions just don't ring true most of the time. I also found the government scenes very hokey, but not out of keeping with other pulp fiction I've read.

While I can't really say that I enjoyed it - the characters were too thin for me to start caring about what happened to them - it is a pretty good story, if you like this genre.
about 3.5 stars
Review copy received from the author a part of Librarything's Member Giveaway Program.

I won this book on Library Thing and enjoyed it a lot. It's so much fun to discover 'new' talent. The writing was good, the characters interesting. There was one character in particular that I felt probably didn't really need to be there, unless he could have been given some more attention. I'm not sure if there was supposed to be a supernatural element going on as well, as that part wasn't completely 'fleshed' out (no pun intended). Perhaps it will be explored in the follow-up book. Recommended.

Quite a good story. I was pleased that I was never quite able to figure any parts out. The back stories for each "character" was jarring but in a good and creepy way.

A newer take on human nature at its darker heart.

Recommended for those who enjoy horror with a strong psychological take.

I wasn't sure what to expect when I won this story from Library Thing. I am so glad I did though, because right off from the start the book pulls you in. Mr. Russell has a wonderful way with words and descriptions. I would just like to point out that this is a horror story after all, there are a few graphic scenes. This story is about what might happen to a group of death row insane criminals when they are left on an island in the middle of nowhere and the island is "alive" waiting for them. Then throw in a shipwrecked woman and you've got a horror story and a twist. I would definitely recommend to others who love horror. I will definitely look into the next in the series when it comes out. Keep up the great writing.

Although confusing at the start, time and place jumps that can be difficult to follow, the writing kept my interest enough to persevere.
As the situation becomes clearer it turns into a really enjoyable read, although there are some parts that I felt could have been improved for continuity.
The first meeting with Seth and his eyes is truly outstanding and shows the calibre of writing that Todd can produce.
Left questioning the ending with the dirt, was it really needed?
Overall a thoroughly enjoyable book that is worth a read.

You have subscribed to Smashwords Alerts new release notifications for Todd Russell.

You have been added to Todd Russell's favorite list.

You can also sign-up to receive email notifications whenever Todd Russell releases a new book.