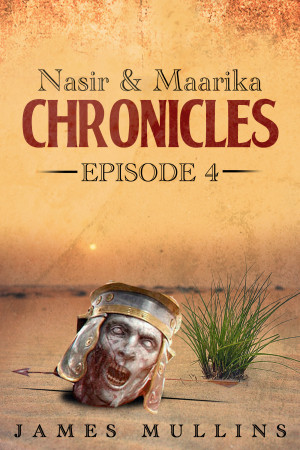 By James Mullins
Nasir and Maarika are of one people but two worlds. Growing up on opposite sides of the Roman Empire's Arabian border in the 7th Century their lives are brought together when an unspeakable evil emerges from the depths of the Arabian Desert.

Set in the Byzantium Infected Universe which begins with the short story Jibreel's Curse and continues in the full length novel Scourge of Byzantium. More
Nasir and Maarika are of one people but two worlds.

Nasir grew up inside Byzantium's Arabia Province where his family prospered. Head filled with the stories of military glories, he decided to turn his back on the family business. Now in command of a remote outpost on the border of the Arabian Desert, his life will forever change when an unspeakable evil emerges from the desert.

Maarika grew up in the open deserts of Arabia. Her family struggled to survive as they moved from place to place to find the sustenance needed to keep their small herd of goats alive. Her life was destroyed when they came, their appetites insatiable. Forced to flee she hopes to find safety within the borders of the Roman Empire.

Nasir and Maarika will be brought together by tragedy that will forever change both of their lives.

This is their story.

I was born into a military family in the United States. At a very early age I was able to travel the world. One of the first places my father was stationed was Germany. Europe was a magnificent land dotted with castles and history. This invoked within me first a curiosity about history, and later a passion. I became captivated with tales of both heroes and heroines of times past.

After my experience abroad, history was filed in the back of my mind. We returned to the United States and went about our lives. School, a trip to Italy with my Grandparents to become acquainted with my Italian cousins, and finally my own tour in the military took me to more wondrous places full of history, such as the Middle East and Iceland. These new experiences helped bring the love of history to the forefront of my thoughts once again.

As life always does, living it got in the way of my passion. More school, and several jobs later history came crashing back to the forefront of my thoughts. This time was different. This time not only did I love reading, but tales of my own began to form in my mind.

I read extensively of several historical fiction and alternative history authors. Some of my favorites being Gordon Doherty, Simon Scarrow, Douglas Jackson, D. Russ and E.E. Isherwood. My real inspiration was Harry Turtledove, a master of alternate history. I picked up a copy of his Guns of the South in 1993. I immediately fell in love with the genre. Though I have read many other alternate history authors Harry Turtledove remains my favorite.

For my first book, Scourge of Byzantium, I combined my love of history with a more recent passion the walking dead. My mind imagined a world in which the infection did not take place in the modern world, but during the later Roman Empire or Byzantium as that nation is known in modern times. Imagine how much better equipped a Roman Army is to deal with this problem. Now imagine how much harder it is to kill a zombie wearing armor!

While I was working on the sequel to Scourge of Byzantium it dawned on me that the Byzantium Infected Universe could tell stories of the infection from many more different view points. Wanting to try my hand at short stories, thanks to some great feedback from a reader, I wrote Jibreel's Curse.

Jibreel's Curse is the tale of how a historical nobody, Jibreel, set the gears in motion to first catch and then spread the infection. It's a perfect instance of if Jibreel had gone left instead of right, the world would have continued and become the one that we know. In this case Jibreel made the fateful decision to change the course of history and his actions resulted in the zombie infection.

My second full length novel Damascus of the Damned picks up the story that ended in Scourge of Byzantium right after that novel left off. It continues the tale of Athos, Baltazar, and Constan in the Byzantium Infected Universe.

The third book in the Byzantium Infected Series, Emperor's Errand was completed and released Christmas day 2018. Continuing the story of the three heroes, Athos, Baltazar, and Constan, their travels take them to the highest levels of the Roman Empire, culminating in a meeting between Emperor Heraclius and Athos & Constan. The Emperor gives them a mission, vital to the preservation of the Empire.

My fourth full length novel Emperor's Errand Part II, is progressing well as of this update (March 2019), and I'm targeting a July of this year release date.

About the Series: Nasir and Maarika Chronicles

Set in the Byzantium Infected Universe, this is a series of short stories featuring Roman Soldier Nasir and Maarika an exotic raven haired beauty from the heart of Arabia.

You have subscribed to alerts for James Mullins.

You have been added to James Mullins's favorite list.

You can also sign-up to receive email notifications whenever James Mullins releases a new book.