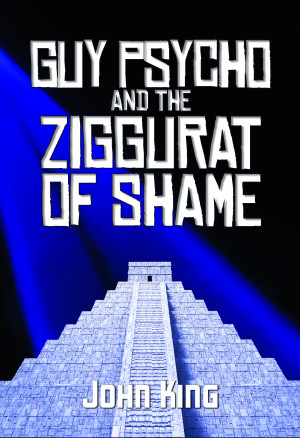 Guy Psycho and the Ziggurat of Shame

In this stumbling adventure, an alcoholic lounge singer must re-enact the epic of GILGAMESH inside a mountain in Tennessee. More
Guy Psycho and the Postmodernaires are broke.

An enigmatic billionaire offers them five million dollars for a private performance of their lounge act. Somehow, that performance includes re-enacting an ancient Assyrian epic deep inside a mountain in Tennessee, in the sub-basement of a mansion that leads all the way to ancient Mesopotamia.

To escape, Guy and his bandmates must retrieve a rumored thirteenth tablet of GILGAMESH. If they don’t, they can’t spend the five million, and worse, they’ll be 5,000 years early for their gig at the Sabre Room.

John King is the host of the world’s greatest creative writing podcast, The Drunken Odyssey, as featured on “best of” lists by Book Riot and The Millions. He holds an MFA in fiction writing from New York University, and a doctorate in English from Purdue University. His work appears in the anthologies 15 Views of Orlando, Other Orlandos, and Condoms and Hot Tubs Don’t Mix, as well as in journals, such as Gargoyle, The Newer York, and Painted Bride Quarterly. He lives in a secret location in the lesser Orlando area with his wife, cat, and a cadre of robot duplicates.

You have subscribed to alerts for John King.

You have been added to John King's favorite list.

You can also sign-up to receive email notifications whenever John King releases a new book.