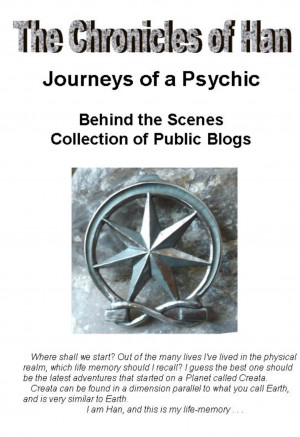 Chronicles of Han: Behind the Scenes: Collection of Public Blogs: 1-52

Content: Han Storm: Chronicles of Han, Behind the Scenes, Collection of Public Blogs 1-52
Legal Responsibility
Foreword
1. Past Life Memories Revealed
2. Exclusive interview with a likeminded friend . . . a safe start at exploring what I have started!
3. Confirmation of Past Life Experience through known Automatic Writing Medium/Psychic!
4. Start of Chronicles of Han
5. Conversation with Psychic, Sylvia
6. Coming to grips with my previous Earth lives
7. Working on Blogs instead of Book!
8. Who am I, who is Han Storm?
9. Reply to comment of keefrichards "Who am I, who is Han Storm?"
10. How do Past Life Memories effect this Earth Life?
11. Where does your loyalty lie?
12. More Books to come!
13. A difficult task
14. Poor Me!
15. No Stopping this Change!
16. Where is the next Book?
17. Becoming ONE takes practice
18. Hectic life
19. Destruction of Trust
20. Healing through Forgiveness
21. How I met my Divine Support Team
22. Physical Change needed to adapt to Higher Vibrations
23. What keeps me here?
24. Recognising re-incarnated people
25. Meeting of Old Friends
26. Different levels of Spirit
27. 'Other' work
28. Finding your very own Destiny
29. What happens if we should fail?
30. Path of the Writer
31. Death: Transformation from the physical back to the spiritual realms
32. Contentment Found
33. The concept of Yoga
34. Visions of Future Events 2011/2012
35. Will I be remembered?
36. A change in attitude
37. The challenge of change itself!
38. Recounting Past Lives
39. Total Recall
40. Soul Protection from Emotional (Over) Growth
41. Dance of the Sexes
42. Unique time, unique opportunities
43. Happy Lunar New Year!
44. Are we alone in this Universe?
45. The Human form scattered across Galaxies and Dimensions
46. The true nature of The Creator
47. Higher Vibrations
48. New Adventure of Han Storm to be published soon!
49. The Day After
50. Vibrations within ‘inert’ items
51. 2nd Chance
52. To those that have been given another CHANCE AT LIFE
About H Gibson
Books in the Chronicles of Han Storm Series
Download: epub mobi (Kindle) pdf more Online Reader
lrf pdb txt
Price: Free! USD
Add to Library
Create Widget
Tags: adventure spirituality healing biography metaphysical yoga esoteric past life multidimensional nde obe
About H Gibson

About H Gibson, Author of The Chronicles of Han Storm: (Preserving Creata, Book 1, Part 1-3 on Wattpad) or purchase direct from Blog.
The Chronicles of Han is a series of books that came about after NDE experiences. In 2004 the Author of Chronicles of Han Storm was caught up in a cooking oil explosion, sustaining third degree burns to 35% of her body including her face and both hands. She twice went into cardiac arrest and was resuscitated by the emergency personnel. It took quite a while for her to get back to functionality, with healing, physiotherapy and two small children to contend with (her baby was seven weeks old when the accident occurred.)
In 2008, after the scarring finally started to heal with the products her husband had developed for her, he gave her a laptop, encouraging her to stop saying that she would one day like to write a book and actually do it.
One book quickly became a Series of reading excitement

About the Series: The Chronicles of Han 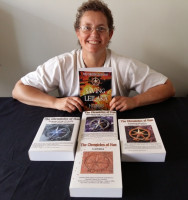 Loosely categorized as real life past live adventures enhanced with metaphysical/paranormal undertones, a good dash of romance and a sprinkle of horror (or step-by-step esoteric guide manuals) . . .

If you love Avatar, The Matrix, Dune, Stargate or LotR, these books will suite you.

"It was not my original intention for people to grow and heal through reading The Chronicles of Han. I started to write the books to heal myself. My husband and a host of fans cannot wait to read the rest of my retellings, finding it extremely exciting stories."-H Gibson, Author, The Chronicles of Han Storm.

Also in Series: The Chronicles of Han

Reviews of Chronicles of Han: Behind the Scenes: Collection of Public Blogs: 1-52 by H Gibson

What has been written about is of immense value and I am grateful for it. I thank you for giving me this magic.

You have subscribed to alerts for H Gibson.

You have been added to H Gibson's favorite list.

You can also sign-up to receive email notifications whenever H Gibson releases a new book.