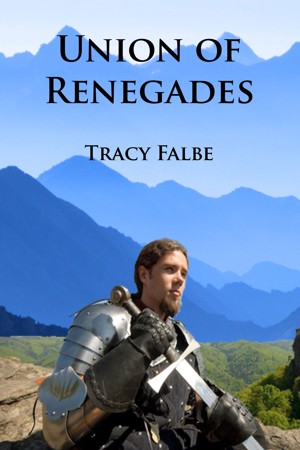 Union of Renegades: The Rys Chronicles Book I

By Tracy Falbe
Rated 4.67/5 based on 6 reviews
The epic begins as Dreibrand Veta and the conquering Horde of the Atrophane Empire reach a mythic Wilderness that beckons with a magical call to glory. But Onja, Queen of the rys, a race far more powerful than the greatest human state, guards this land. She has the power to imprison souls and her genocidal rage is legendary. Everything is at risk for her desperate enemies, the union of renegades. More
Have you ever looked at the facts of your life and realized your dreams won't come true? Have you ever looked into the unknown and seen opportunity? For Dreibrand Veta, a young officer in the Horde of the Atrophane Empire, these questions explode from his spirit in a fit of rage and launch him into an epic struggle. After he encounters a rare super race, the rys, he is forced to choose sides between passionate rivals and navigate his way through a foreign culture all while plotting to seize his own wealth and glory.

In this opening novel of The Rys Chronicles you'll meet a man scarred by bad deeds who answers the call of a heroic cause. An unconventional heroine will tug at your sympathies as she bravely faces adversity with all the strengths and vulnerabilities of her womanhood. And overarching it all are the rys. Their magic makes them superior to humans, but they are not above employing humans in their deadly schemes.
Download: epub mobi (Kindle) pdf more Online Reader
lrf pdb txt
Price: Free! USD
Add to Library
Create Widget
Tags: romance adventure fantasy magic epic war queen swords sorcery series empire monsters wilderness warriors generals warlords
About Tracy Falbe

I have been hooked on fantasy and science fiction since preschool when I watched Star Trek the Original Series with my family on TV. Then came Star Wars at the theater when I was 5, and a few years later, I discovered the joys of reading fantasy with the Hobbit and the Lord of the Rings.

The elements I like most about the genres are the high stakes (save the world, overthrow the empire, etc.), the diversity of characters, and how magic or extraordinary technology allows plots to expand in interesting ways. The ability of fantasy and sci fi to include analysis and criticisms of social conditions like religion and politics is especially fascinating as well. When this is done in conventional fiction, people and readers descend into arguments about whether an opinion is valid or the historical information is accurate instead of assessing the concepts themselves.

When I'm not writing, my other passions include cooking, growing food, reducing my plastic waste, raising rabbits, spinning wool, and reading.

Raising Rebellion Book Trailer for The Rys Chronicles
Rebel, or suffer the yoke of perpetual evil as magical rivalry and ambition for empire erupt in The Rys Chronicles epic fantasy series. With the fourth and final fantasy book now published, fantasy readers can begin a new quest for wealth and power with this complete series of four fantasy novels by Tracy Falbe from Brave Luck Books (TM).

Also in Series: The Rys Chronicles

I have by now read "Union of Renegades - The Rys Chronicles, book one" by Tracy Falbe.

First of all, it is a solid work, the kind I know from LONG fantasy novels. Rebels fighting & struggling against tyrants, with an interesting edge on ghosts. There were no format issues in the PDF version I received, as a free version, on #Smashwords.

The story is interesting, but weakened by a prose not caring much about formulating sentences in an interesting, or entertaining, way at all. The second, minor drawback: Overuse of the name Dreibrand (one of the protagonists) in nearly every sentence.

With around 180000 words, fans and readers of old-school novels will rejoice in this being a cost-free part of more from the author. I found it had a great concept, but I also think too much disregard for delivering it to the readership (I mean making transparent what happens, who is who, and such, NOT shipment) doesn't deserve five stars in the edition, as it is. A revision could make fans cheer and roar, of that I am certain.

Hard Read of epic proportions in deed and doings. Rather than be 'unputdownable' regular breaks are as essential to the reader as the
army of cast.

A wild trip through a fantasyscape peopled by humans as well as magical Rys. Don't forget to bring your sword and shield! A dart gun will come in handy, too.

The story starts off with an interesting premise; that of warrior-general Dreibrand, of the conquering Atrophane army. He yearns to explore the Wilderness, an exotic and unknown land to the West. But he is of a family cast into disrepute, and has to work hard to win the favour of Hordemaster Kwan, his superior.

The other main character was Miranda. I found her story strangely and unexpectedly compelling; beaten and oppressed by her petty, but physically intimidating, partner who is intent on using her to put coins in his pocket.

The beginning of the story certainly piqued my interest, and had enough elements to prod my curiosity. The next 80% is a fantastic build-up of events, where we see new characters and places interwoven with a mysterious race called the rys, blue magical beings.

After having been unable to stop reading this well-crafted and weaved story with multiple character viewpoints, I was really looking forward to some action. The build-up was great and certainly intriguing, but I wanted to be rewarded. And alas, I was. The last 10% was a fulfilling reward to a well-rounded story, and gives the reader satisfaction that they have read a great book. But unfortunately the reader feels they must read the next book to learn more about the characters, which made this technique a double-edged sword.

There were a few spelling and grammatical mistakes in this book, which intensified just before the middle, I think, but they did ease up for the second half of the story.

Overall this story is a pleasant world to be immersed in, and a thoroughly enjoyable read. The paperback set on the author’s website looks very tempting.

Tracy Falbe has created a magical landscape that comes to life. The hierarchical structure is fascinating, and I find the dynamics between the people who populate this world quite interesting. There are several different races of people in this book, and I felt like I had a good feel for the spoken (and unspoken) rules of each culture. I didn’t feel I knew each of the individual characters quite as well, however. I think this author did a great job with description and creation of this world, but the dialogue between the individual characters felt flat.

The book is a touch lengthy and builds slowly. It was an interesting read the entire way through, but, by the end, I could hardly remember where we had started. This first book in the Rys Chronicles establishes the world and the battle to be fought, and it sets up expectations for the following book. There is plenty of action and some romance interspersed throughout the tale, and the book prepares the reader for the next adventure in the series.

There were a noticeable number of minor typos in my copy of the book. Some sentences and phrases flowed beautifully while others were a little awkward and somewhat ambiguous. Add in the wonderfully crafted world in contrast to the flat dialogue, and the writing style feels somewhat inconsistent.

This is a book that just makes you forget the world you are living in and grabs all your senses and refuses to let go until the last page. I was completely immersed into the world the author painted and my imagination was filled with the taste and sounds of this world. I did not ever want to stop reading it and was a little lost when I was finished. I can not wait to finish the series. This is a must have for everyone.