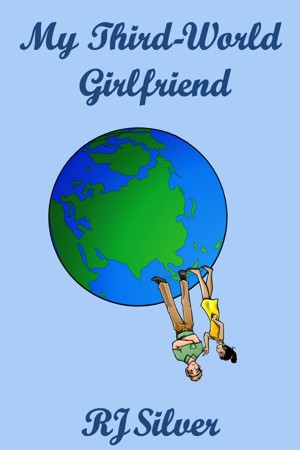 Rated 4.50/5 based on 4 reviews
Gerry Lankin has a problem. All his life, women have been hitting him over the head, usually for good reason. Recognizing he's at fault, he's about to make big changes in his life, when three older men convince him that the key to romantic happiness isn't self-improvement; it's finding a woman with low expectations.

My name is RJ. I’m a man who writes quirky romantic humor books. That alone should tell you that I'm psychologically imbalanced.

Most people ask me why I write. The answer is simple. Like most men, I get in a lot of trouble with the woman in my life. When she's really angry at me, and I'm hiding from her, writing is the one thing I can do that doesn't make any noise.

Reviews of My Third-World Girlfriend by RJ Silver

I purchased and read this book long ago. I wanted to read again before reviewing, thinking maybe I hadn't enjoyed it much because I was overly tired.

I've just re-read the book, and honestly ... it isn't my favorite. Modern twist to a fairy tale, yes. Quick read, yes. It wasn't nearly as entertaining as my favorite, though.

I've read all three of R J Silver's stories available on this site, and I am seriously impressed. He has a real talent for telling a modern-day fairytale punctuated with moments of laugh-out-loud humour.

This particular story is about a man who's been unlucky in love teaming up with three globetrotting old lechers to learn a few lessons about the opposite sex. Not the lessons he intended, perhaps, and he certainly doesn't learn them easy.

It's very politically incorrect - less innocent, I would say, than either of his other stories (yes, including the Princess and the Penis) - but hilariously delivered, boasting a cast of colourful characters you'll enjoy spending time with, and rounded off with a satisfying ending.

My Third-World Girlfriend is the second short I’ve read by RJ Silver. I really think RJ is a rising star when it comes to adorable, quirky and funny stories. His much praised, The Princess and the Penis isn’t a fluke. My Third-World Girlfriend is well written with an excellent moral to it. Plus, it has a bit of suspense because you don’t know until the very end what will happen to the protagonist, Gary Lankin.

Poor Gary can’t get a break when it comes to love. He wants to settle down and find that special woman who won’t hit him in the head with canned yams or find other ways to give him lumps on his head. Gary doesn’t know what he’s doing wrong and it really upsets him because he’s going to end up all alone if he doesn’t get his act together. Gary’s life changes forever when he overhears a group of men talking in the airline lounge at Heathrow airport. Fritz, Hank and Aiden have a sure fire plan to find a woman who won’t control them or clobber them with blunt objects when they misbehave. They’ll find a woman who has low expectations. But before they do that, they’ll head off to Thailand for a little R&R- drinking and sowing their oats.

Gary joins his new friends and ends up carousing day and night. One morning after another rough night of oat sowing and binge drinking, a local woman named Kinlaya comes to his aid. She cooks him breakfast and offers him advice. Soon Gary and Kinlaya are spending all their time together and then they move in together. Gary is now “nesting” with Kinlaya and his friends are upset. They think Gary has been whipped by Kinlaya. But Gary loves Kinlaya and she hasn’t tried to bop him over the head or thrown anything at him. But then the Fazis, known as the feminist rights activists, arrive on the scene and Gary and his fellow cohorts are caught in a gender war where they may become casualties.

My Third-World Girlfriend is only 30 pages, but well worth the read. I chuckled a few times over the advice and antics Gary is given and finds himself in. Gary is a very sweet, but at times naïve, who just wants to be loved. Unlike his three flavorful friends, Gary has a kind heart. You want to give Gary a hug.

The last few pages have an almost on the edge of your seat feel to it because you don’t know what Gary’s fate will be.

My Third-World Girlfriend is a sweet story that kept me smiling the entire time I read. RJ Silver may be one of the best self-published authors out there. If he can make such an impression with a story like this and The Princess and the Penis, I can’t wait to see what he can do with a full length story. A publisher really needs to give RJ a writing contract, ASAP.

At 99 cent, My Third-World Girlfriend is well worth the price and one story that gave me the warm fuzzies. This really hits home for those who enjoy reading a humorous take on a man’s expectation when it comes to women and love.

I'm not sure how men will take this one in, but I think it's fair to assume women will giggle all the way. Nevertheless, I think both sexes have something to learn of the hard lesson "Mr. Gerry" goes through in order to value love and true relationships. It's a light reading and the main character is a kind soul that you immediately sympathise with and it makes you wish him a happy ending. I couldn't put the book down once I started and I laughed a couple of times as the situation goes from bad to worse. I'm sure everyone will at least smile while picturing "The Fazis" and reading other funny references.

You have subscribed to alerts for RJ Silver.

You have been added to RJ Silver's favorite list.

You can also sign-up to receive email notifications whenever RJ Silver releases a new book.