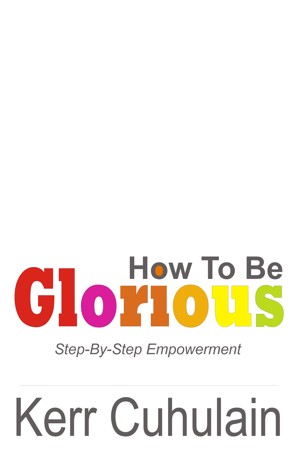 How To Be Glorious: Step By Step Empowerment. 2nd Edition

By Kerr Cuhulain
A system of self discovery and empowerment. I show you that basis of your power is self knowledge. I show you that psychic ability is your birthright and that you can use it to chart your course in life. I've show you how you can put your intentions to work push your dreams into being. Release your inner power to take charge of your life. Master yourself and everything else will be taken care of. More
This is a book of empowerment. It is designed to help the reader master themselves, which will allow them to create their own reality and master their world. Use your intention to bring your dreams into reality out of that potentiality within you. The chaotic currents of fate are navigable: You just have to learn how to steer. It is about fearlessly exploring who you are and using all of your characteristics as tools to steer your course through life. To empower yourself, you must know yourself. There is a divine presence within, there to inspire you to use your own power.
If you’re powerless, you just haven’t learned how to use your strength. It is about removing obstacles to your empowerment by correcting a flawed self image. It is about unleashing the mind power which is your birthright and using it as you were meant to. You can no longer be a victim once you claim your power. If you don’t control your life, it will control you. This is about taking back control for your life. It is about making a decision to be a warrior, not a victim. If someone has power over you, this book will show you how to take it back. Stop letting life just happen to you and start directing the path of your life.
This new book by Kerr Cuhulain is a natural progression from his earlier books on warrior philosophy.
Available ebook formats: epub mobi pdf rtf lrf pdb txt html
First 20% Sample: epub mobi (Kindle) lrf more Online Reader
pdb
Price: $4.99 USD
Buy Add to Library Give as a Gift
How gifting works
Create Widget
Tags: warrior empowerment confidence power victim personal power
About Kerr Cuhulain

Kerr Cuhulain is a retired police officer/dispatcher who has been a Wiccan for 47 years and was involved in anti-defamation activism and hate crimes investigation for the Pagan community for decades. Kerr was awarded the Shield of Valour by the Witches League for Public Awareness.
Kerr is the author of the Law Enforcement Guide to Wicca, Witch Hunts,, Wiccan Warrior, Full Contact Magick, Magickal Self Defense, Pagan Religions: A Handbook for Diversity Training, Modern Knighthood, How to Be Glorious: Step by Step Empowerment, Stand Like a Tree: Mastering the Movement of Energy, and The Wizard: The Story of the First Wiccan Cop to go Public About His Pagan Beliefs. Kerr is the co author of a safety book for social workers and nurses: Safe Approach. Kerr is also the author of Ancient Recipes for Modern Kitchens, a cookbook of ancient recipes. He writes sword and sorcery fantasy fiction as C.A. Ennis and paranormal romance as Carrie Bryce. He is the host/writer of an Eastlink/Coast Cable community TV show on astronomy called Night Lights, has appeared on APTN’s “Coyote Science” TV show for First Nations youth, and is writer/host of a BravoFACTUAl documentary, “Starry Nights”, directed by Wiccan priestess Dodie Graham-McKay.
Kerr is the former Preceptor General of Officers of Avalon, an organization representing Neo-Pagan professionals in the emergency services (police, firefighters, emergency medical technicians). Kerr is the Grand Master and founder of a Wiccan order of Knighthood called the Order of Paladins. In December 2014 Kerr was accepted at a faculty member of Amber K’s Ardantane School of Magick.
Kerr is currently the National Secretary of the Royal Astronomical Society of Canada as well as the President of the Sunshine Coast Centre of the RASC. The RASC has just published his book Building a Small Observatory.

Reviews of How To Be Glorious: Step By Step Empowerment. 2nd Edition by Kerr Cuhulain

You have subscribed to Smashwords Alerts new release notifications for Kerr Cuhulain.

You have been added to Kerr Cuhulain's favorite list.

You can also sign-up to receive email notifications whenever Kerr Cuhulain releases a new book.