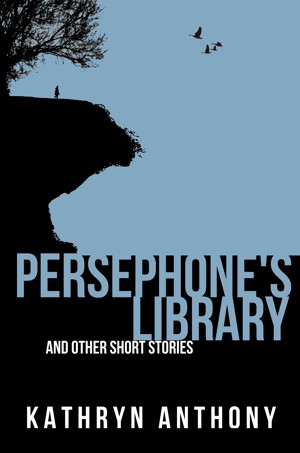 Persephone's Library and Other Short Stories

By Kathryn Anthony
A collection of five stories centered around themes of social dis-integration. They are stories in which things fall apart, and the centre cannot hold. The world is changed, and what remains of civilization is left ragged and flailing–the result of forces the protagonists find inexplicable, even as they struggle to find meaning and rebuild their lives. More
“This morning, I walked up past the new subdivision to the end of the world. Or at least, to the beginning of the end, just at the edge of the mud flats.

It’s deceptive, when you stand there, where the asphalt breaks off in that jaggedy line and the flats begin. They look like they spread out forever, but actually, it’s just a couple of hundred yards. And then the world ends.

They’ve set up patrols along the edge at night, so people don’t wander out there accidentally and fall off. They also try to catch the jumpers when they can, but they don’t always succeed. People still slip through.

Take this morning, for instance. I mean maybe I just got lucky, but there was no-one in sight when I walked up. Even the watchers in the houses along the edge weren’t around. I could’ve just kept right on going and maybe even jumped if I wanted to.

But I didn’t. I just wanted to see the flats.

They look a little like I imagine a beach must have looked, back in the day, except of course there would have been ocean, instead of nothing.“

Persephone’s Library and Other Short Stories is a collection of five stories centered around themes of social dis-integration. They are stories in which things fall apart, and the centre cannot hold. But, rather than the drama and flash of apocalypse, in each of these stories, the end of society as we’ve known it comes not with a bang, but a whimper. The world is changed, and what remains of civilization is left ragged and flailing–the result of forces that the protagonists find inexplicable, even as they struggle to find meaning and build lives in the context of these ravaged landscapes.

The first story in the anthology, "Don Coyote de la Merika", is also available in its entirety as a separate, free download, by way of a proper sample for readers who are considering downloading the collection.

Born in India to bi-racial parents, Kat Anthony grew up in Canada, and later lived in Japan, where she attended an all-girls' school and studied such arcane subjects as the tea ceremony and Japanese calligraphy. Kat has worked on a film in Germany, been a contestant in a French-language gameshow, and had close encounters with snakes and crocodiles in Australia. These days, she enjoys her day job and writes whenever she can fit it in--early mornings are best.

Kat lives in Ontario, Canada, with her husband and two cats.

You have subscribed to alerts for Kathryn Anthony.

You have been added to Kathryn Anthony's favorite list.

You can also sign-up to receive email notifications whenever Kathryn Anthony releases a new book.