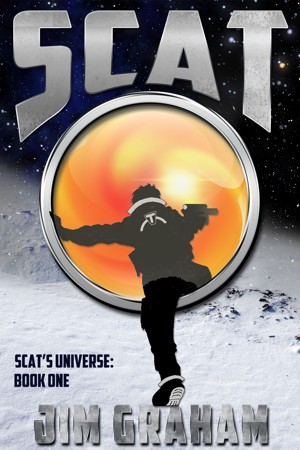 By Jim Graham
Rated 4.67/5 based on 6 reviews
SCAT is a 'big, intelligent, interesting novel' that readers say they found hard to put down, that the scifi enthusiast site Republibot.com called 'epic', 'a fun book, and a good read.' A provocative 'what if'.

The sequel, ARMY of SOULS is also published on Smashwords. More
Whose DNA will escape a depleted Earth: yours or the one per cent’s?
Who owns your new world: you or the company?
And do you dare speak your mind on a world where the board owns the very air that you breathe?

Welcome to Scat’s universe, where companies rule, regulators are corrupt and democracies are financially bankrupt; where one company will soon turn its back on a desperate, resource-poor Earth to build a galactic empire of its own.

As powerful interests collide, one man is condemned for a murder he did not commit; a murder that kick-starts a rebellion.

Join ex-Marine killing-machine Sebastian Scatkiewicz as he takes on the biggest corporation of them all in the biggest land-grab ever.

Jim was born in Bushey, Middlesex, England and grew up in Hatfield, Hertfordshire. He passed selection for the 21st Special Air Service Regiment at age 17 and was later commissioned into the 3rd Battalion, The Queen’s Regiment as a Second Lieutenant. He spent several years in Northern Ireland during the late 70s and early 80s. Since leaving the army in 1986, he has worked in Malaysia, South Africa, Belgium, Singapore and Hong Kong.

Jim started writing scifi in September 2010 and has since published SCAT and BIRDIE DOWN, both based on events in Scat’s Universe. ARMY of SOULS, the sequel to SCAT is also available from Amazon and Smashwords. SCAT is a big 'what if'. ARMY of SOULS is more of a 'what now'. Both are space operas, which question political systems, economic dependency, compromised regulators, and too big to fail businesses, and go on to question conflict between knowledge and faith. BIRDIE DOWN and the up-coming PHARMA are rebellion 'shoot 'em ups'.

Jim now lives with Vivien, his Malaysian-born wife, two East Asian street dogs and four pampered cats in Asia’s World City, Hong Kong. It is the company-run city which inspired Go Down City and the Lynthax Corporation in Scat’s Universe.

Scat is Jim Graham’s first novel. Best described as a hard science-fiction thriller, the dialogue-driven plot revolves around ruthless resource-based political machinations worthy of Frank Herbert’s Dune. Like Dune, there is also a struggle for planetary independence. While lacking the mystical allure of Herbert’s Muad’ Dib, the book’s main character - hard-nosed laconic ex-soldier, Scat - makes a far more believable rebel leader. We follow his travels and exploits throughout the novel. However, Graham has chosen to use multiple points of view so we sometimes briefly see things through the eyes of other characters.

Events unfold in a number of distinct locales, each one very distant from the others. Notable among these are the Sinai desert on Earth, a mining camp on the small airless planet Prebos, the wonderfully depicted Go Down City on the planet Trevon, and a secret base on planet Runnymede run by the villain of the piece, the giant oppressive corporation Lynthax (an entity so powerful that it has its own warships).

Scat comes to life fairly well, although his low-key, stay out of trouble style means it takes a while to get the sense of him. We more quickly get a good feel for his more expressive friend, “Birdie” Goosen. The novel’s most easily grasped character is Lynthax’s vicious head of planetary security, Petroff. Baddies are seldom subtle. Other characters tend to be just names.

The novel has some notable lines. Graham is himself ex-military and only a soldier would understand the level of risk well enough to write, “The occasional round ripped through the air a little ways off, and the rocks crunched underfoot, but other than that it was remarkably peaceful.” The rest of us would be making like sheets of paper on the ground! Later, Scat gets into an up elevator on Trevon, a near-Earth-gravity world, after spending six weeks in the low-gravity mining camp on Prebos. Graham neatly captures his character’s weakened state with, “It was a brutally fast ride.”

There are also occasional evocative pieces of descriptive writing. I would like to have seen a few more of these. My favourite is the moody silent “bus” ride from the Trevon spaceport to Go Down City. Graham crisply depicts the bleak barren landscape, the snow blowing across the road, and lays on an absorbing description of the city lodged within an immense 450-metre-deep gash in the frozen planet’s surface.

The underground mining camp on Prebos is reminiscent of the titanium operation in “Outland,” the sci-fi thriller where Sean Connery plays the beleaguered outpost sheriff. As in the movie, we get a realistic look at rough tough working men in a dangerous and stressful workplace where off-hours entertainment is limited.

While the overall tone of the novel is sober, Graham works in flashes of humour: the running gag about Scat’s escalating number of salaries is a treat. To add even more spice, we have a mysterious derelict alien vessel replete with bizarre technology. This provides a terrific late plot twist that moves the novel onto a completely new plane and, presumably, sets up for the sequel.

The plot twists a number of times as the story progresses. Just when you think you see where things are going, they suddenly start going somewhere else. I enjoyed this immensely. My interest level got a nice boost at every turn.

At the cost of extending an already lengthy review, I want to say something about an important question raised by Graham’s novel (I love speculative fiction that does this): who will take humankind into space? It is already clear that it will not be government. Politicians are useless here because electors will not vote for massive expenditures on what can only be a speculative adventure – at least in the early going. Like it or not, the job must be done by huge corporations. They are the only entities with both the financial resources and the freedom of decision-making necessary to shoulder the risk. Graham is making the valid point that once such powerful well-funded organizations get beyond the reach of Earth-bound governments there will be no one there to make sure they behave themselves. Democratic nations must ensure that wherever corporations go, proper responsible government goes with them.

Scat is a big, intelligent, interesting novel. If you enjoy hard gritty sf with plenty of well-handled dialogue, you will not go far wrong with this one.

Scat by Jim Graham is a great, futuristic tale involving everything you could expect to come from a Sci-fi story; be it rebels wanting to break their chains to Earth or frightening, very god-like aliens. The word Scat is actually a person, a high ranking Earth soldier with the last name Scatkiewicz. Soon after the story begins, he is hired to act as a spy and help keep an eye on the ever-growing society of those who live away from the planet, people who find that their lives and work only produce what is endlessly gobbled up by the very overpopulated Earth.
Living as a spy to try getting close to people can start to make that spy see things from the ‘enemy’s’ point of view. Before long Scat almost considers himself to to be one of the colony-rebels. His experience as a soldier before-hand makes him to be a quite worthy adversary. The problem that his enemies face is deciding if it would do them better to rid the universe of is anger for them or to try using his strength as their own asset.

This story had me riveted. I enjoyed the interactions between the people, and the descriptions of futuristic technology. The idea of the controller aliens and their technology caught me as sickeningly fun.

The book can be viewed as being of two distinct halves. In the first half the author seeks to establish the characters and premise for the story that follows. The long dialogues with only intermittent action might, on initial impression at least, seem somewhat pedestrian. However, a reader who perseveres with the book is richly rewarded, for just as one starts to think this novel is a typical example of the ’good wins against the evil empire’ sci fi genre, the author throws in a twist which shatters any such illusion. Occurring roughly midway through the book, it is a pivotal point, because from thereon the pace picks up rapidly, and the turn of events that follow succeed in pulling the reader ever deeper into the increasingly ambitious story line. The final chapters serve up perhaps the most intriguing and certainly the most explosive development, propelling the book into a first class page turner and leaving the reader impatient for more at its conclusion. In summary, the book’s first half is a bit of a slow burner, but serves as a touch fuse to light up a phenomenal second half, leaving readers impatient for the second volume which surely must follow from this promising author!

This book is compelling read with a skillfully crafted narrative that makes it hard to put down.
The story itself is clever, topical and thought provoking and the characters, especiallys the lead character, Scat, are skillfully drawn.
Overall, I would recommend this book to anyone, not just fans of the Sci-Fi genre, as the author, Jim Graham, has crafted a very enjoyable, intelligently written novel that keeps you wanting more.

I really enjoy the fast pace in the book. The only time I put it down was when I need to sleep!. The main character is a man who tries to do his best with what he has but trouble seems to come his way no matter how hard he tries to dodge them.

Totally looking forward to the next book, I was quite lucky cause I get to read the final draft before it went to the press (well not the press any more cause its online).

You have subscribed to alerts for Jim Graham.

You have been added to Jim Graham's favorite list.

You can also sign-up to receive email notifications whenever Jim Graham releases a new book.