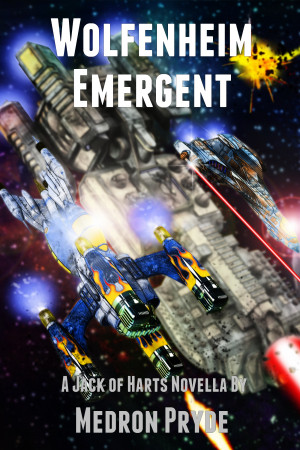 By Medron Pryde
Malcolm McDonnell used his contacts inside the Hurst Family to build the Wolfenheim Project in order to found a new colony in Alien space. Then the head of the Hurst Family discovered where his money went and sent a fleet to impound it. Now he and the Class One Colonization Ship Wolfenheim fly through Alien stars on their way towards a new home with a determined foe on their heels. More
Malcolm McDonnell grew up in a world before Contact, when we still thought we were alone in the universe. Then the Peloran brought medicines that nearly wiped out diseases, and extended the human lifespan into the centuries. They helped us study advanced technologies, and expand our colonies hundreds of lightyears from Earth. It was a golden age for mankind, but the Peloran were not the only ones to make Contact.

Four years after the Shang attacked us, Malcolm had used his contacts inside the Hurst Family to make the Wolfenheim Project a reality. His mission was to take humanity’s message back to the stars with that most human of responses. A new colony in Alien space. No Alien power would drive us from them. We were coming. We would always be coming.

But the head of the Hurst Family discovered he was funding the Wolfenheim Project and sent a fleet to impound it. Now Malcolm McDonnell and the Class One Colonization Ship Wolfenheim fly through Alien stars on their way towards a new home with a determined foe on their heels. One that Malcolm does not remember, but who most certainly remembers him.

Hello, my name is Medron Pryde, and I am the creator of Jack of Harts.

Jack of Harts is a place I hope you like. It’s a place where we did things right, where we built a world we would be happy for our children to grow up in. It’s not perfect. There is conflict. But by and large, we made the hard decisions, and we did what needed doing. We made a good world. I know today that stories tend to go much more dark than that, dystopian futures where we have destroyed our world or enslaved our populations. Places where even the Good Guys are more dirty and hairy than they are clean-shaven and happy. Jack of Harts is not like that. It’s not a world where somebody takes a step forward to fix something and gets knocked two steps back. I don’t like those worlds. I don’t want to spend a lot of time imagining them.

Jack of Harts is based in many ways on what I grew up wanting. I was raised in a Christian home, told to do onto others as you’d have them do onto you. I watched Bonanza, where the Cartwrights helped anybody who came along needing it. On Superman, I watched the Big Blue Boy Scout (even if he was in black and white) fighting the Bad Guys each week for Truth, Justice, and the American Way. On Quantum Leap, a man lost in time always found a way to make the world he dropped into each week a little bit better. On Star Trek, a bunch of people I liked traveled through the stars to go places that no man had been to before…because it was there. In Battlestar Galactica, Buck Rogers, and Star Wars, the plucky outnumbered heroes came back swinging with a smile, a joke, and a hearty laugh, and they never gave up hope that they could find or build a better world to live in. These are the stories I grew up with. These are what I enjoy, and these live on in my optimism.

In Jack of Harts, I try to capture that. The characters of Jack, Charles, and Aneerin, just to name a few, are all people who lived in a world before The War came. When that happened, they aren’t the people who crossed the border to hide from the draft, the people who gave up hope and found a bottle or a needle to hide behind. These are the people who stood up, walked into a recruiting office, and volunteered to defend their ways of life. They may cover it up by saying they’re just in it for the money, or because that person over there just needed taking care of. But don’t let that fool you. They are the best of us, a reflection of the true Big Damn Heroes who grab a rifle, a pistol, and a bulletproof vest (or maybe a fireproof suit) to protect our freedoms and our lives everyday.

Jack of Harts is a place where I like to think these people would like what they see. It’s a place I enjoy going to when I write, with people I’d like to share a beer with. I’ll keep it that way. I hope it’s a place you’ll enjoy reading, and I hope you come back each day or maybe each week to read some more.

So have a good one, and I hope to see you again.

About the Series: Jack of Harts

In 2205, we learned the answer to one of the oldest questions of all time. Are we alone? They brought medicines with them that nearly wiped out diseases, and extended the human lifespan into the centuries. They helped us study advanced technologies, and expand our colonies hundreds of lightyears from Earth. It was a golden age that many thought would never end.

Jack grew up in a world at peace, his only interests, partying and girls. But when a sneak attack killed millions of Americans, and wiped out almost everything and everybody Jack knew, he volunteered to serve and get some payback. But the Marines want more than people looking for revenge, and cybernetic partners demand a higher commitment. If Jack wanted to earn his commission as a Marine Corps fighter pilot, he had to let himself be forged into something stronger than he’d ever felt the need to be. A man willing to live up to the name of his squadron. A Cowboy.

Also in Series: Jack of Harts

Reviews of Wolfenheim Emergent (Jack of Harts 6) by Medron Pryde

You have subscribed to alerts for Medron Pryde.

You can also sign-up to receive email notifications whenever Medron Pryde releases a new book.