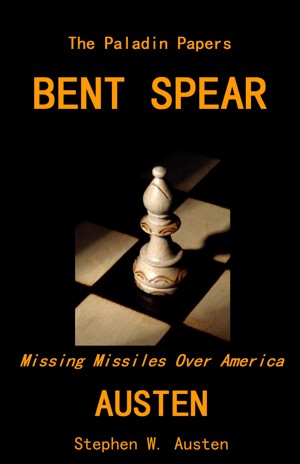 By Stephen Austen
Rated 5.00/5 based on 1 reviews
"A B-52 bomber mistakenly loaded with six nuclear warheads flew from Minot Air Force Base, ND, to Barksdale Air Force Base, La., on August 30, resulting in an Air Force-wide investigation..." -- Army Times, September 10. 2007

"The weapons were always in our custody and there was never a danger to the American public." - Air Force Spokesman.

How did six missiles disappear? Where did they go? More
Others in The Paladin Papers Series:
“PAVE BOLO: Target Iran” is the fifth story in “The Paladin Papers” military techno-thriller series. It is also a thought-provoking prequel to its companion story “411: Cybergeddon. Iran is reeling. The “Stuxnet” computer vrus infects its nuclear program control systems. Iranian leaders are hungry for revenge. Resisting calls to halt their nuclear programs, a crushing cyber-strike against the United States is planned. It’s time for PALADIN and his Onyx Ops team to derail Iran’s nuclear ambitions. They unleash one unique weapons system tracing its legacy to the Cold War and another taken from the pages of tomorrow's science fiction in a single, decisive masterstroke.

“ONYX OPS: The Paladin Papers” - Masters of black ops ruthlessly navigate today’s globalization. From World War II, to the Cuban Revolution and the Kennedy assassination, through the CIA’s Operation Phoenix and the oil fields of Vietnam. It leads to today’s Afghanistan. Must-read, fast-paced fiction with high-impact insights into the geopolitics of global resources. You will think about this long after you put it down.

TACIT ALUMNI: Tracking Terror” - in a world of Global Jihad, it is September 11, 2011, the tenth anniversary of 9/11. From downtown Washington DC to Area 51 to Somalia and the Gulf of Aden, “PALADIN” and his high-tech Onyx Ops team commemorate this tragic event in their own special way. Follow the masters of global black operations at Onyx Ops as they orchestrate new technologies in the relentless hunt for terrorists.

This is an excursion into the near future of Radio Frequency IDentification (RFID) technology and the possibilities it raises. We justifiably fret over the “asymmetric attacks” from our adversaries. We sometimes forget that we have the technological means at our fingertips to leverage some “asymmetric attacks” of our own.

I hope you'll enjoy reading these as much as I did in writing them.

I was born in Lafayette, Louisiana and raised in New Orleans. But I truly grew-up as I travelled or lived in some thirty-four states. Retired, I now reside with my family in North Carolina.

My writings and interests are eclectic. My latest series, The Paladin Papers, are fast-paced, fact-based military/techno thrillers. Based on today's events and often set in the near future, they offer thought-provoking entertainment. They will keep you thinking long after you put them down.

I am certain you will enjoy reading these stories as much as I did writing them. . .

Also in Series: The Paladin Papers

Fast-paced and with an authenticity that reminded me of Tom Clancy or Cussler or Brown. Very authentic with a real twist at the end! You'll enjoy it..

You have subscribed to alerts for Stephen Austen.

You have been added to Stephen Austen's favorite list.

You can also sign-up to receive email notifications whenever Stephen Austen releases a new book.