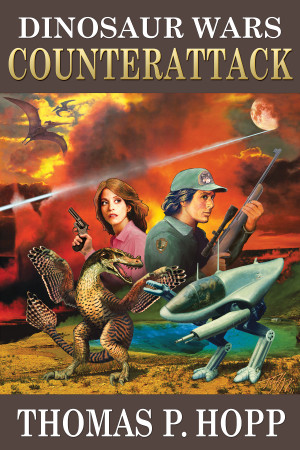 By Thomas P Hopp
Rated 5.00/5 based on 1 reviews
Now humans are the endangered species. Intelligent dinosaurs have returned from outer space to claim their home world -- our world! More
Wildlife biologist Chase Armstrong and rancher's daughter Kit Daniels are at the center of the action again as war for domination of the earth resumes. The Kra, dinosaurian invaders from space, have no place for humanity except on the menu! An action packed adventure story filled with huge beasts of the past, intelligent dinosaurs, US tanks and submarines, and two young heroes who may find love if they survive long enough. Action, start-to-finish, with well researched dinosaurs. Suitable for all ages.

Another wonderful adventure among dinosaurs. This is a great fast-paced science fiction story. The young heroes, Chase Armstrong and Kit Daniels are lost in a world gone mad with dinosaurs, while a human sized type of dinosaur tries to make humans the endangered species. Good reading for any age group.

(reviewed the day of purchase)
Tony Lim reviewed on May 9, 2012
(no rating)
I love this book! But, has humans never though of mirrors to deflect the beam from the moon? Just a suggestion for the next book...and when's that coming?