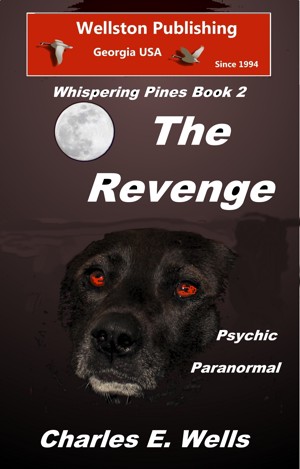 By Charles Wells
An Atlanta based drug cartel takes revenge on the Veal brothers of West Creek County for their interference with a major illegal drug distribution network. Things go from hot to explosive with lives depending upon trusting Gail's ESP and visions to steer them clear of dangers. Revenge is a standalone novel, not a cliff hanger. Suggested, but not required, to read Book 1 to learn the characters More
Whispering Pines "The Revenge is book 2 in the 9 books (and counting) thriller/suspense series by Author Charles E. Wells. It's a southern flavored fast paced "small town vs big city" crime adventure series centered in Georgia USA. Each book in the series stands alone with no cliff hangers. Read one or read them all in order. Exciting edge of your seat enjoyment for all ages. Rated PG.

I was asked why I'm a writer and responded with the following. I didn't choose writing, it chose me. I've spent the better part of my life (and I'm 60 years old) writing, but I still hesitate to call myself an Author. I've written and published seven books, six are fiction, and still I don't feel like a writer because I don't fit my mental image of one. I don't feel compelled to be the next Mark Twain or Tom Clancy. I don't want to get filthy rich from my writing and I don't care for the glory of being recognized while walking down the street. All I want to do is entertain people and hold that wisp of power and control knowing I can make you laugh, or make you cry. I can take you to heaven or send you straight to hell, all with a few words placed appropriately. I can do in one paragraph what God needs seven days to accomplish. Best of all, I can make you think great thoughts or I can help you dream in a reality that I create. A reality you can enjoin or not with the flip of a book cover or press of a digital reader button. All of this isn't writing, it's insanity and escape for the sake of entertainment.

You have subscribed to alerts for Charles Wells.

You have been added to Charles Wells's favorite list.

You can also sign-up to receive email notifications whenever Charles Wells releases a new book.