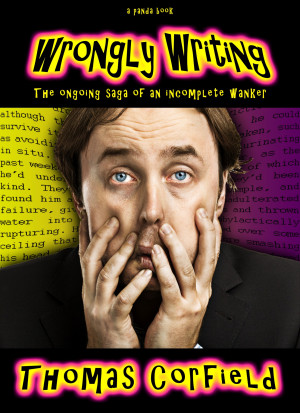 The much anticipated ongoing saga of an incomplete wanker, involving international drug smuggling operations, complications over library membership, and the Dutch. More
Follow a man barely deserving of the title as he flails through a turgid cesspit of human depravity, only to discover that he’s the one bunging up its U-bend. Wrongly Writing has even more psychiatrists, anaphylaxis and cringing social ineptitude than the first Wrong Book, and proves that while editors exist for a reason, the author clearly doesn’t.

Similar to The Bible, in that Jesus is mentioned over twenty times, and entirely dissimilar to Médard Alard's 1922 masterpiece, "Est-ce Que Quelqu'un a Vu Mes Clés de Voiture?", which sold over thirteen copies thanks to a national cheese shortage, Wrongly Writing explores the boundless absurdity arising from a social ineptitude so crippling that it can only be facade.

“These books are like a bad meal:
in poor taste and unfinished.”
- Oleg Vanastanovitski, Russian Mafia Hitman (unconvicted)

Thomas Corfield was born in London several years ago, definitely before last Thursday. This was a good year for all concerned, and for him in particular, because without it, later years would mean little. He owes a lot to that first year, and now lives because of it in undisclosed locations after having successfully absconded from probation. Although he finds making friends difficult, this is only because no one likes him. Including his mother, who didn’t bother giving him a name until he was nine. His solicitor describes him as having an allergy to apostrophes and an aversion to punctuation that borders on pathological. This makes the popularity of his books all the more remarkable. At least it would if there was any. But there isn't. So it doesn't. He was recently interviewed in Joomag's Meals of Food magazine, which didn't help anyone.

About the Series: The Wrong Books

Follow a man barely deserving of the title as he flails through a turgid cesspit of human depravity, only to discover that he’s the one bunging up its U-bend, and explore the boundless absurdity arsing from a social ineptitude so crippling that it can only be facade.

Also in Series: The Wrong Books

You have subscribed to alerts for Thomas Corfield.

You have been added to Thomas Corfield's favorite list.

You can also sign-up to receive email notifications whenever Thomas Corfield releases a new book.