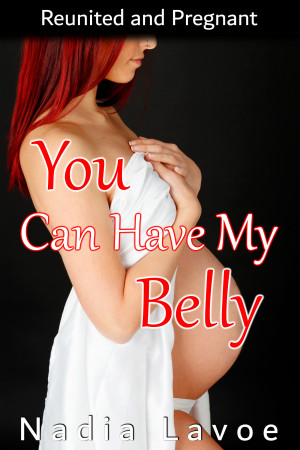 You Can Have My Belly: Reunited and Pregnant

Halie eventually breaks it off with Ian so that she can go back to her life as Harper. And now, months later, Harper once again finds himself confronted with Ian, the hard-body stud who rocked his world when he was a woman.

Over the course of a few weeks, Harper and Ian have become the best of friends. But Ian doesn’t know that Harper is really the stunning Halie – the woman whose passion burned a hole in his bed over the summer.

Will Harper tell Ian that he’s really Halie? Will he give into the feminine urges that are tempting him to become a woman once again?

Is there a such thing as a man who has a fertile belly? Well, they exist in my naughty tales of male to female (mtf) gender swapping. These feminized men are so conflicted by the double life they now seem to lead that they don’t know what to do with themselves. However, when it comes to planting seeds on fertile ground and putting buns in the oven, the Alpha Males these mtf's fall for help them choose the more feminine side of life. 😉

You have subscribed to alerts for Nadia Lavoe.

You have been added to Nadia Lavoe's favorite list.

You can also sign-up to receive email notifications whenever Nadia Lavoe releases a new book.