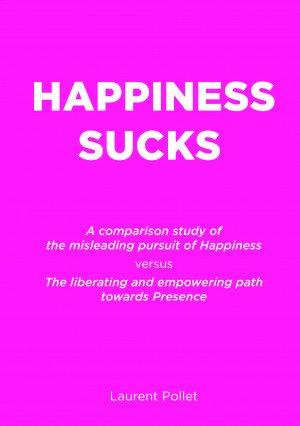 By Laurent Pollet
Rated 5.00/5 based on 1 review
This pompous and pretentious book, painfully written by some arrogant and pedantic prick, boasts the overambitious objective to teach us the ultimate TRUTH, no less! Indeed, this iconoclastic and revolutionary essay shamelessly pretends to tackle THE philosophical issue of all times: simply how TO BE. Well, more to the point: to be AWARE, or not to be, with a view to greatly feast on Life! More
HAPPINESS SUCKS! comes as a witty essay on spirituality, offering a positive comparison study between the pursuit of happiness versus the path towards Presence. In spite of being written in a playful voice and a tongue-in-cheek tone, it earnestly aims at first and foremost defining happiness once and for all, and then at questioning the validity of its sacrosanct pursuit. Whereas the idea of happiness is almost religiously revered all around the world, this nonconformist endeavor shows itself brave enough to buck the global trend in order to debunk the mythical aura of the most sought-after concept. In truth, 7 billion humans all around the globe seem busy – more or less successfully – searching for elusive happiness, even though its frantic pursuit often reveals itself quite misleading, if not totally counterproductive in the end, according to iconoclastic me.
On the other hand, practicing Presence – the virtuous discipline of wisely accepting and enjoying life as is – reveals itself both liberating and empowering, mostly because it does not require from us anything else than sheer awareness and appreciation, contrary to the overabundance of material goods “happiness” seems to necessitate lately. Indeed, the originally philosophical quest has recently been turned into an infinitely wide market of mass products, ranging from foodstuffs, clothes, to cars, which are being shamelessly commercialized worldwide, thereby threateningly polluting and exhausting our dear planet. It is high time we find ourselves a sounder approach to this almost pathological obsession with happiness, and the eco-friendly discipline of Presence might be the wisest alternative…
Because virtually all the available self-help books put happiness on a consensual pedestal throughout the world, I mischievously decided to knock it down by wrong-footing everybody thanks to an irreverent and catchy title, with a view to make my point stand out more humorously.
I confidently pledge that once you have read this apparently stupid, and yet highly enlightening book, your life will not be desperately governed by neither the spiritual, nor the commercial pursuit of fleeting happiness any longer.
You will then be able to enjoy being alive more freely, without the stressful pressure of feeling happy at all costs; nowadays, the whole concept has indeed been turned into a real dictatorship. You will also be able to get rid of the dreadful and shameful sentiment of failure we get more often than not, when “dear” happiness seems to elude us. What a great relief!

What would you do with another chance at life? One woeful night at work as a sworn French interpreter, Laurent Pollet faced the heart-wrenching task of relaying to a mother the death of her son. As he spoke with the mother, his wife’s words from the morning replayed in his head. She had nagged him for having turned off the tap to the swimming pool. After Pollet finished speaking with the mother, he realized that he and his wife no longer had a future together. And in that moment, Pollet embarked on the path towards the discipline he calls “Presence.”

For too long, sneaky admen have pushed their “happiness” agenda on us. If we buy their product, we will be happy. If we get married, we will be happy. Pollet says, “No more!” Because the purpose of life is not about happiness; rather, to quote Pollet, “It’s all about mating. Period.” It’s high time we replace the sought-after happiness, a feeling, with Presence, a state.

Pollet’s prose is bold, brazen, but truthful. At times, his verbose and stream of consciousness style and grandiose vocabulary may flabbergast you. But if you stick with it, you will find an honesty and kindness in this bona fide Frenchman’s words. Pollet is an author of impressive erudition who writes with a humble pomposity that can only ever belong to him.

You have subscribed to Smashwords Alerts new release notifications for Laurent Pollet.

You have been added to Laurent Pollet's favorite list.

You can also sign-up to receive email notifications whenever Laurent Pollet releases a new book.