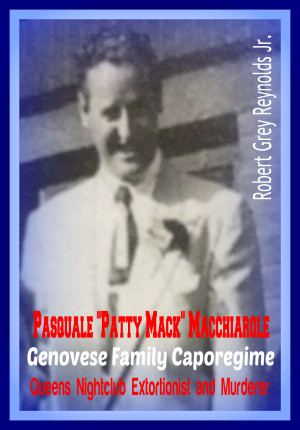 By Robert Grey Reynolds, Jr
An April 25, 1972 indictment named Brooklyn truck driver Thomas DeLio, Robert Grimaldi, of Fresh Meadows, Queens, and Ralph Jacobsen of Jericho as the murderers of Cloud Room manager Conrad Greaves. My e-book looks at Greaves' murder, an elaborate extortion ring and a betting operation that was prominent in the New York City area in the 1960s and 1970s. Pasquale Macchariole was connected to both. More
Pasquale Macchiarole was among those charged in the murder of Cloud Room nightclub operator Conrad Greaves. Located near LaGuardia Airport, the Cloud Room was the target of extortionists for a year and a half. Macchiarole had links to the Colombo and Genovese crime families. His closest associate was Frank "Funzi" Tieri, a caporegime in the Genaro Catena/Genovese crime syndicate.