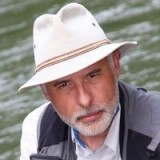 Published 2014-06-14.
Describe your desk
At the moment, single-pedestal oak, stained a warm brown, five feet wide by almost three feet deep. The drawers are that deep as well. Two small drawers at left and center, three taller drawers down the right side. On it are The American Heritage College Dictionary (4th edition), Pressfield's The War of Art, Bierce's The Devil's Dictionary, Stanbrough's Beyond the Masks and Hemingway's Complete Stories: The Finca Vigia Edition.
When did you first start writing?
When I was five, I began describing things I saw from the side window of the back seat of my father's '57 Chevy.
What's the story behind your latest book?
It's a collection of short fiction. I enjoy writing short fiction because it's a dying art. However, I'm also working on a post-apocalyptic novel that contains not even one zombie, vampire, etc. Humans are difficult enough without throwing in things that can't be killed or won't remain so.
What motivated you to become an indie author?
My good friend Harvey Stanbrough led me to Smashwords. He insisted. Here I am.
What is the greatest joy of writing for you?
The challenge of saying things in a new way. The knowledge that a great story will stick with the reader.
What are you working on next?
Whatever story occurs—the world is full of them, you know—and that novel I mentioned. Or another one.
Who are your favorite authors?
Ernest Hemingway, Ray Bradbury, Jack Williamson.
What inspires you to get out of bed each day?
The lack of whiskey or the lure of the pen.
When you're not writing, how do you spend your time?
Fishing, hunting, experiencing life and doing everything I can to annoy those who believe for some reason they're entitled to a "fair share" without earning it.
Do you remember the first story you ever wrote?
It was a silly story about how Capitol Hill was formed. Difficult to recall exact details. I was six.
What is your writing process?
I sit, I write. When I get stuck, I write the next sentence, then write the next sentence. As a result, my subconscious has realized I won't allow it to get stuck, so it doesn't anymore. I and my friend Gervasio Arrancado have this in common.
How do you approach cover design?
Harvey Stanbrough designs all my covers for me, both for ebooks and print.
What do you read for pleasure?
Anything by my friend Gervasio Arrancado, anything by Hemingway, anything by Ron Wick (I love mysteries but don't care to write them). I also enjoy the poetry of Howard Nemerov, Anthony Hecht, Wilfred Owen and William Baer. I heartily recommend them. If you want to become a great fiction writer, learn the ropes of poetry, and I don't mean broken prose.
What is your e-reading device of choice?
What's an e-reading device?
What book marketing techniques have been most effective for you?
I just write. The more stories and other works I have out there the more easily readers can find my work.
Smashwords Interviews are created by the profiled author or publisher.

The Shaman by Nicolas Z Porter
Price: $1.99 USD. Words: 3,600. Language: English. Published: September 16, 2016 by StoneThread Publishing. Categories: Fiction » Fantasy » Paranormal, Fiction » Literature » Literary
Two men are on a camping trip in their favorite remote spot. Nearby is an ancient pueblocito in a crevice in a cliff above the Gila River. Was the pueblocito home to a shaman? It's a great place to explore, theorize and slather philosopy across the desert. Especially after the shaman makes an appearance. 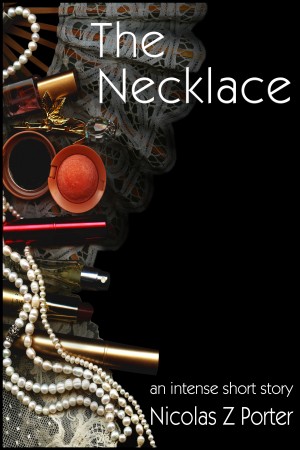 The Necklace by Nicolas Z Porter
Price: $1.99 USD. Words: 3,410. Language: English. Published: September 8, 2016 by StoneThread Publishing. Categories: Fiction » Mystery & detective » Short Stories, Fiction » Thriller & suspense » Action & suspense
A routine interview with a murder suspect. Given the preponderance of evidence against him, probably he'll either lawyer-up or confess. Either way will mean an early day for the detective. But sometimes there's more evidence than you expect. 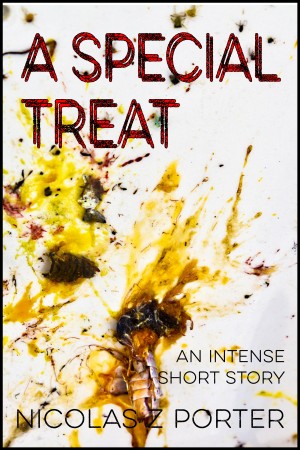 A Special Treat by Nicolas Z Porter
Price: $1.99 USD. Words: 4,340. Language: English. Published: September 1, 2016 by StoneThread Publishing. Categories: Fiction » Horror » General, Fiction » Thriller & suspense » Psychological thriller
A weary man sits in his recliner in his living room. He's waited all week for his special TV show, and it's on. It's the first episode of a new season. Then someone starts knocking at his door. We can forgive him for not answering immediately, can't we? Well, can't we? 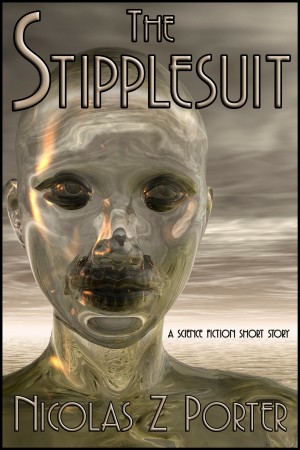 The Stipplesuit by Nicolas Z Porter
Price: $1.99 USD. Words: 3,380. Language: English. Published: December 24, 2014 by StoneThread Publishing. Categories: Fiction » Science fiction » Short stories
In this intense SF short story, Wesley Smithfield-Rush III, PhD, came aboard a shuttle as part of a space archaeology team to conduct an archaeological survey and inventory of an abandoned transport before it was recovered. It was an easy, routine way to keep his hand in and show off how much he knows. What harm could it do? 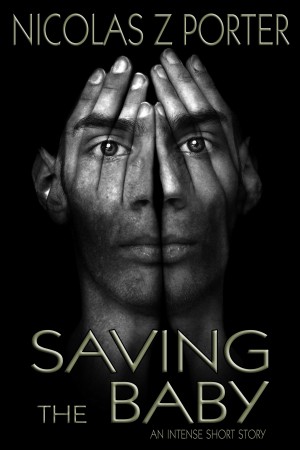 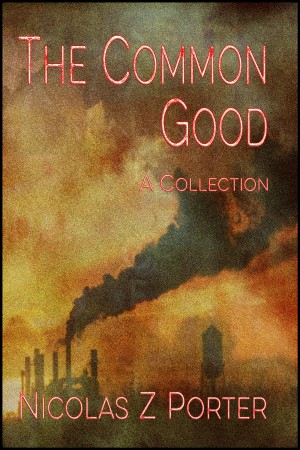 The Common Good: A Collection by Nicolas Z Porter
Price: $3.99 USD. Words: 14,400. Language: English. Published: November 6, 2014 by StoneThread Publishing. Categories: Fiction » Anthologies » Short stories - single author, Fiction » Thriller & suspense » Psychological thriller
In this collection of five stories, you'll find a hit-woman who inadvertently recruits a bored youth into service; a story of pure, extremely adulterated human nature; an incident in a waiting room; a living vision on a pier in the dark; a cautionary tale that is uniquely and unfortunately American. 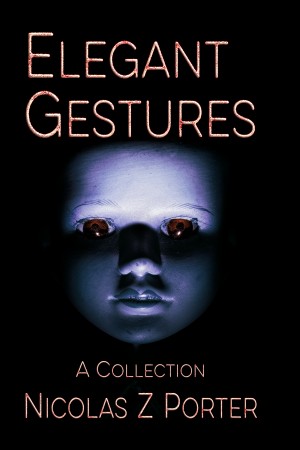 Elegant Gestures: A Collection by Nicolas Z Porter
Price: $3.99 USD. Words: 9,660. Language: English. Published: November 6, 2014 by StoneThread Publishing. Categories: Fiction » Anthologies » Short stories - single author, Fiction » Thriller & suspense » Psychological thriller
In Elegant Gestures: A Collection you'll discover a ghost story; a young mother-to-be, maybe, who is nothing short of mental; proof that one man's god is another man's monster; a family coven; and the rag-draped bones of a reluctant prophet, perhaps, moving along the street cursing your life with his existence. Oddly enough, without him, you wouldn't have the freedom to avoid him. 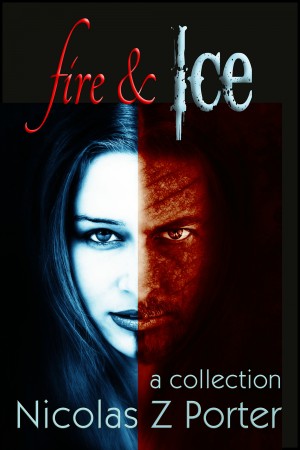 Fire & Ice: A Collection by Nicolas Z Porter
Price: $5.99 USD. Words: 23,700. Language: English. Published: October 28, 2014 by StoneThread Publishing. Categories: Fiction » Thriller & suspense » Psychological thriller, Fiction » Themes & motifs » Psychological
A hit-woman who inadvertently recruits a bored youth; pure, extremely adulterated human nature; an incident in a waiting room; a living vision on a dark pier; a uniquely American cautionary tale; a ghost story; a young mother-to-be who is mental; proof that one man's god is another man's monster; a family coven; and the rag-draped bones of a reluctant prophet, cursing your life with his existence. 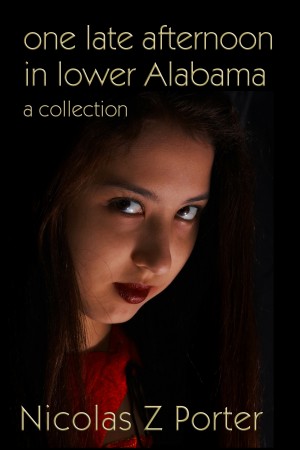 One Late Afternoon in Lower Alabama: A Collection by Nicolas Z Porter
Price: $3.99 USD. Words: 10,790. Language: English. Published: October 28, 2014 by StoneThread Publishing. Categories: Fiction » Literature » Literary, Fiction » Adventure » Action
Five Intense short stories. Visit Pamplona, watch as a smart-aleck is trained in the best possible way; a young mother-to-be and her escort say goodbye in a bus terminal; enter a village on patrol to the sound of fireworks... or is it? In southern Alabama, things move at their own pace and are very seldom what they seem. These character-driven stories will remind you of Hemingway's later works. 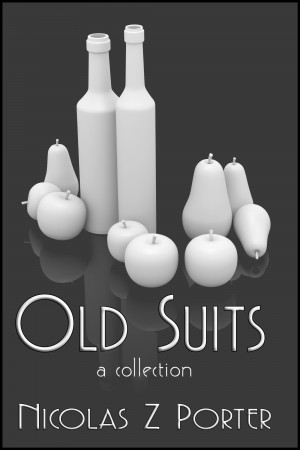 Old Suits: A Collection by Nicolas Z Porter
Price: $5.99 USD. Words: 21,350. Language: English. Published: October 28, 2014 by StoneThread Publishing. Categories: Fiction » Adventure » Action, Fiction » Literature » Literary
These are ten intense short stories from backwoods fishing in Montana to war in Southeast Asia to the rural south to Pamplona and more... so much more. Literary and genre alike, these character-driven short stories will remind you of Hemingway's works in his later years.
View their profile to see all of their books