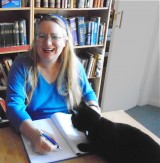 After living in Germany, China, Mongolia and Nepal, Rayne has settled on the south coast of England in dilapidated seaside town of former Victorian grandeur.

Her black cat Sulu – adopted from the rescue shelter - likes to snuggle between her arms while she writes, purring happily. He adores books, especially of the horror genre, and can often be found ‘reading’ one or sitting in the bookcase between horror classics.

Her website with information and tips for writers is here: raynehall.com.

For writing and publishing tips, as well as cute photos of Sulu the book-loving cat, follow Rayne on Twitter: https://twitter.com/RayneHall

Do you remember the first story you ever wrote?
When I was six, I told the teacher that the stories in the school book were stupid and I could write better ones. She challenged me to write a story about a letter's adventures from writing to delivery. When I handed it in, she was startled that a six year-old could write so well. Of course, she didn't know I'd had the help of my older sister. From then on, when the other kids had to read the dull pieces for their homework, she often assigned me to write stories, and I soon learnt to do it without my sister's help.
What are you working on next?
I always have a dozen writing projects in progress.

Right now (31 August 2013) I'm working on these:
A steampunk horror short story about a werewolf in a funicular railway car.
A quirky fantasy story about an introvert dragon.
A horror story about unrequited love turning into hatred.
A dark historical story about Smugglers in Regency England.
A sequel to my dark-epic fantasy novel Storm Dancer. The sequel's working title is Flame Bearer.
Another book for my bestselling Writing Craft series for authors. The next book in the series is Writing Dark Stories.
I'm also writing the introductions to the next two anthologies of which I'm the editor: Dragon: Ten Tales of Scaly Beasts, and Cogwheels: Ten Tales of Steampunk.

... and more.
Read more of this interview.

Where to find Rayne Hall online

You have subscribed to alerts for Rayne Hall.

You have been added to Rayne Hall's favorite list.

You can also sign-up to receive email notifications whenever Rayne Hall releases a new book.