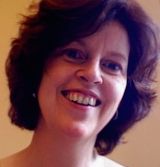 Sharon Rowse is a Vancouver–based writer who has always loved reading, in every genre and every format. In the absence of a good book (which doesn’t happen often now that we have e-books!) she’s been known to read the back of the cereal boxes. Fulfilling a lifelong dream, Sharon is now writing two mystery series.

Her debut novel, THE SILK TRAIN MURDER is the first book in the “Klondike Era Mystery” series. The book received starred reviews in Booklist and Quill & Quire and was nominated for an Arthur Ellis award for Best First Novel. In this book, a down on his luck gentleman washes up in Vancouver, hungry and broke. Running from his past, afraid of his future. Until he his best friend’s arrest for murder.

Granville’s desperate hunt to find the real killer before they hang his friend takes him to the seedy side of the city; to burlesque halls, gambling joints, brothels and opium dens. Along the way he finds companionship in odd places and an ally — and more — in Emily Turner, the emancipated daughter of a very Victorian father.

DEATH OF A SECRET is the first book in the “Barbara O’Grady Series”. These are urban private eye novels, based in Vancouver and seen through the eyes of failed artist turned investigator Barbara O’Grady. In this book, long forgotten scandals and murders erupt with the murder of Senator Ed McMather. Barbara frantically searches for a serial killer in an investigation with roots deep in the past. Upper-crust Vancouver families reveal dark secrets and the body count rises as Barbara unravels lies within lies and finally reaches the truth. A twisting tale of old secrets, death and treachery.

For more information about Sharon’s work, visit her website at www.sharonrowse.com

Where to find Sharon Rowse online

You have subscribed to Smashwords Alerts new release notifications for Sharon Rowse.

You have been added to Sharon Rowse's favorite list.

You can also sign-up to receive email notifications whenever Sharon Rowse releases a new book.