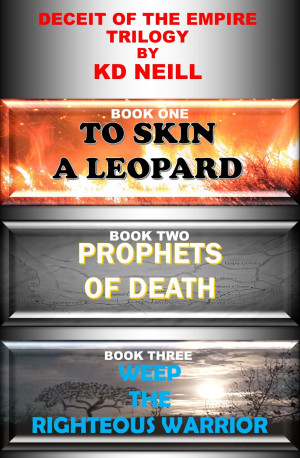 By KD Neill
TO SKIN A LEOPARD, Book one, PROPHETS OF DEATH, book two and WEEP THE RIGHTEOUS WARRIOR, book three in the trilogy, DECEIT OF THE EMPIRE, set in 19th Century South Africa. These are books of fiction based on actual events over decades involving the barbaric ethnic cleansing of the Xhosa people of the Eastern Cape, perpetrated by the British Army, the army of the British Empire, an army controlled and commanded by an extreme, dark society called the ELOS (the EnLightened OneS), which has infiltrated the governments in London and in Cape Town. The series tells the story of Jamie Fyvie and Iain McColl, recruited by the Secret Field Police, to seek out and destroy the ELOS; of the initial colonisation by the British Empire in the Cape Colony. It tells about love, commitment and family; it tells of the sexual desires of the rich bored elite played out at decadent secret swop parties, of a fortune in relics and treasure buried by the Knights Templar, which must not fall to the hands of the ELOS; it tells of death and destruction, deceit and subterfuge from Liverpool to Cape Town, to Freetown and the killing fields of the Eastern Cape frontier.

Deceit of the Empire 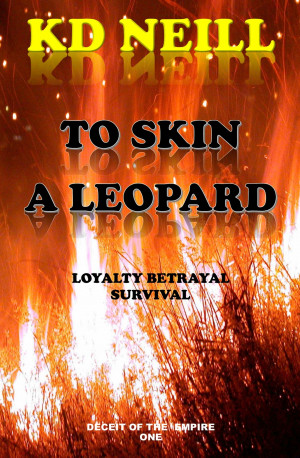 To Skin a Leopard by KD Neill
Series: Deceit of the Empire. Price: $1.99 USD. Words: 112,570. Language: British English. Published: May 20, 2020. Categories: Fiction » Historical » Victorian, Fiction » Cultural & ethnic themes » Cultural interest, general
Jamie Fyvie and Iain McColl set sail for Cape Town to wage war on the ELOS a dark force in control of the armed forces They must crush a plot to wipe out the Xhosa clans. The voyage sees them battle with mutineers to save their own lives and two young ladies. An ELOS executioner pursues Jamie and Iain for clues to a treasure buried by the Knights Templar. The Xhosa fight a bloody war to be free. 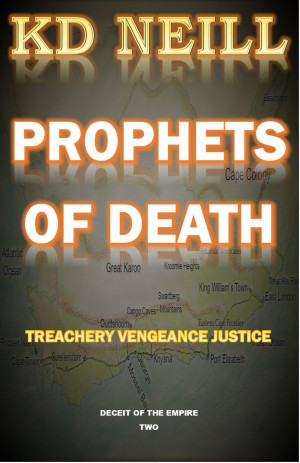 Prophets of Death by KD Neill
Series: Deceit of the Empire. Price: $2.99 USD. Words: 105,700. Language: British English. Published: July 7, 2020. Categories: Fiction » Historical » Victorian
The Xhosa clans are betrayed. The Royal Navy is strangely absent. Will the chiefs believe the false prophets and order the killing? Jamie Fyvie and Iain McColl find a clue that could lead to gold buried by the Knights Templar. A sordid party lets the elite act out their fantasies. Can Jamie and Iain protect their loved ones and stay ahead of the ELOS assassins and stop the architects of genocide? 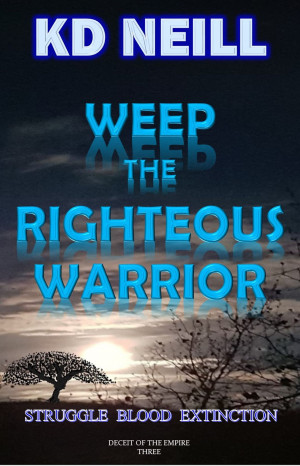 Weep the Righteous Warrior by KD Neill
Series: Deceit of the Empire. Price: $2.99 USD. Words: 108,110. Language: British English. Published: August 27, 2020. Categories: Fiction » Historical » Victorian
The Xhosa have suffered under the oppression of the British Empire. The sons of the old chiefs call for war. Jamie Fyvie, Iain McColl, their wives and children come under attack so they take the fight to the enemy. The ELOS have returned, they want the diamond mines and revenge. They control the British Army. They’re back to cause chaos giving the army the excuse to inflict death and destruction.