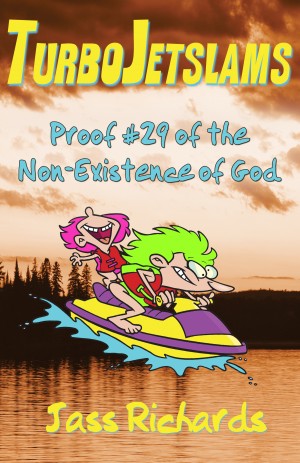 TurboJetslams: Proof #29 of the Non-Existence of God

Jass Richards' new novel, TurboJetslams: Proof #29 of the Non-Existence of God, tells the tale of one person's pathetic and hilarious attempts to single-handedly stop the destruction of a little piece of beautiful Canadian wilderness by the increasing numbers of idiots who couldn't care less.

"Extraordinarily well-written with wit, wisdom, and laugh-out-loud ironic recognition, "TurboJetslams: Proof #29 of the Non-Existence of God" is a highly entertaining and a riveting read that will linger on in the mind and memory long after the little book itself has been finished and set back upon the shelf (or shoved into the hands of friends with an insistence that they drop everything else and read it!). Highly recommended for community library collections." Midwest Book Review
Download: epub mobi (Kindle) pdf more Online Reader
lrf pdb txt
Price: Free! USD
Add to Library
Create Widget
Tags: comedy humor funny wilderness hilarious jass richards sarcastic cottage book cottage life
About Jass Richards

Jass Richards (jassrichards.com) has a Master’s degree in Philosophy and for a (very) brief time was a stand-up comic (now she’s more of a sprawled-on-the-couch comic). Despite these attributes, she has received four Ontario Arts Council grants.

In addition to her Rev and Dylan series (The Road Trip Dialogues, The Blasphemy Tour, License to Do That, and The ReGender App), which has reportedly made at least one person snort root beer out her nose, she has written This Will Not Look Good on My Resume (shortlisted for the Rubery Book Award), followed by its sequel Dogs Just Wanna Have Fun ('nuff said). She has also written the perfect cottage-warming gift, TurboJetslams: Proof #29 of the Non-Existence of God (watch for the sequel, CottageEscape.com: Satan Takes Over), which, along with License to Do That, made it to Goodreads' Fiction Books That Opened Your Eyes To A Social Or Political Issue list, and a (way)-off-the-beaten-path first contact story, A Philosopher, A Psychologist, and an Extraterrestrial Walk into a Chocolate Bar, to which Jane Smith's Translation Dictionary is a 'companion' book. Lastly, she has written Too Stupid to Visit¸ a collection of funny bits from her stand-up non-career.

Excerpts from her several books have appeared in The Cynic Online Magazine, in Contemporary Monologues for Young Women (vol.3) and 222 More Comedy Monologues, and on Erma Bombeck’s humor website. Her one-woman play Substitute Teacher from Hell received its premiere performance by Ghost Monkey Productions in Winnipeg.

Her worst-ever stand-up moment occurred in Atlanta at a for-blacks-only club (apparently). Her best-ever stand-up moment occurred in Toronto when she made the black guy fall off his stool because he was laughing so hard at her Donovan Bailey joke (the guy set a world record for running the 100M in 9.84 seconds, yeah? Big wup. My dog can do better than that. 'Course, she's black too).

Reviews of TurboJetslams: Proof #29 of the Non-Existence of God by Jass Richards

You have subscribed to alerts for Jass Richards.

You have been added to Jass Richards's favorite list.

You can also sign-up to receive email notifications whenever Jass Richards releases a new book.