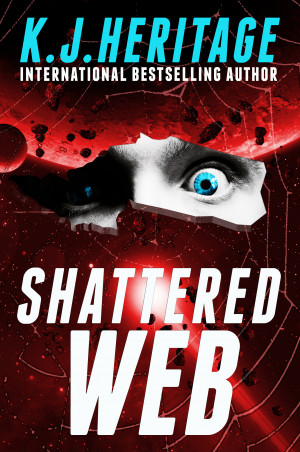 By K.J. Heritage
Trapped on an insane Company bioship with a dead crew, murderous survivors and heading for certain destruction…just another day at the office for Vatic...

Experimental Company bioship, the CSS Ariadne, has cut all communications and launched herself into hyperspace—heading towards enemy territory and certain destruction if she cannot be stopped.

The crew managed to send out an SOS before the Ariadne disappeared. Someone was murdered… but who?

Vatic, a Skilled empath in the reluctant employ of the Company, is drugged and forced to board the rogue ship. He arrives to find the vessel full of corpses, a small band of suspicious survivors, and no explanations.

Our hero soon realises that not everyone who survived is as they seem. There is an imposter aboard, but who is it, and what are their motives?

Vatic must use all his talents if he and the ship are going to survive.

But survival is what the Skilled do best... isn't it?

K.J.Heritage is an international bestselling UK author of crime mystery, sci-fi and fantasy.

His first sci-fi short story, ‘ESCAPING THE CRADLE’ was runner-up in the 2005 Clarke-Bradbury International Science Fiction Competition. He has also appeared in several anthologies with such self-publishing sci-fi luminaries as Hugh Howey, Michael Bunker and Samuel Peralta.

He was born in the UK in one of the more interesting previous centuries. Originally from Derbyshire, he now lives in the seaside town of Brighton. He is a tea drinker, avid Twitterer (@MostlyWriting), and autistic (ASD) human being.

About the Series: Vatic

He's a crack empath detective on the run. But when the soulless 'Company' bring him back to solve a complex murder, can Vatic escape with his life?

You have subscribed to alerts for K.J. Heritage.

You have been added to K.J. Heritage's favorite list.

You can also sign-up to receive email notifications whenever K.J. Heritage releases a new book.