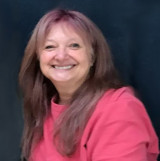 Published 2014-08-23.
What is the greatest joy of writing for you?
I love the sense of discovery. Making up stories has always been a joy for me, but now that I plan my tales and put them down on paper I have come to appreciate those moments when something happens that totally surprises me. It's great fun and the twists that I didn't see coming turn out to be my favorite parts of each of my books
What do your fans mean to you?
Far more than I would have guessed. I began with the idea that my stories were a creative form of self-expression, and it wasn't until I had that first novel finished that it occurred to me that I desperately wanted to find like minded souls who would read and enjoy what I had written. I'm a shy introvert, so this sudden need for others surprised me.

My books are kind of idealistic and intellectual. There is a fair amount of action and drama too, but at their heart my books are most appreciated by people who like to learn things while they read, and by people who enjoy wondering about human capabilities and the nature of reality and the meaning of life. So when I find a fan, I know that I've also found a kindred spirit of sorts, and that means the world to me. I'm driven now to keep writing the kinds of books that my fans will like.
What are you working on next?
Right now I’m editing and rewriting d4, the fifth book in this collection of six called 46. Ascending. I’m looking forward to starting the sixth book early in 2015. I can’t imagine that I will ever stop writing fiction now, but I can’t say exactly what will be next after these six stories. I have a lot of ideas.
What motivates you the most?
I confess to being an idealist. In the end, I want my books to add to the sum total of hope in this world, to add to the joy, to add to the love. That sounds pretty syrupy, I know. But if I accomplish this even a little bit, I’m going to be very happy that I picked up my laptop and started writing.
Who were your favorite authors when you were growing up?
Two authors affected me a lot as a young girl. Madeleine L'Engle and her “A Wrinkle in Time” hadn’t been out all that long when I first read it and I thought it was greatest thing ever. Of course it went on to have sequels and win all sorts of awards. The other author, Jane Langton, wrote a book called “The Diamond in the Window” and I obsessed over that book in grade school. Both authors shaped my young view of the world and convinced me that there was real magic tucked in-between and all around the layers of ordinary reality.
What made you want to be a writer?
All my life characters have marched their way through my head, having all sorts of adventures and interactions while I waited at traffic lights. It was more a matter of deciding that I really had to start writing this stuff down.
What bothers you the most?
I’m terribly intolerant of intolerance. I firmly believe that the best and worst human qualities are well distributed among every age group, both genders, every race, culture and religion, every sexual preference, every style and every income level. To me, one of the missions of a writer is to take a reader outside of their own day to day world and into that of another, and to thereby increase our understanding and appreciation of each other. (Yes, even our appreciation of intolerant people.)
What do you do to unwind and relax?
I love to travel but to be honest travel is seldom relaxing. Sitting on my front porch with a glass of wine is relaxing. I do garden, yoga, watch more crime procedurals on TV than I should, and I play a lot of online word games.
What is your favorite quality about yourself?
I’m always trying to see things through the eyes of others. It makes it harder to dislike people, and I suppose that it helps with my writing too. Yet sometimes I find myself defending or explaining a stranger’s behavior that’s just awful and then I think “what am I doing?”
What is your least favorite quality about yourself?
I’m such an introvert. Like, at work I actually will stay in a bathroom stall until another woman is done at the sink and leaves the restroom, just so I don’t have to talk to her. Is that weird? I don’t know, but I’m sure that I’d be better at promoting my books if I had more of the extrovert in me.
What’s your favorite place in the entire world?
My front porch. I know that sounds boring, but I live in the country and my front porch is exceptionally nice. It’s about fifty feet wide, ten feet deep, filled with flowers and surrounded by birds and butterflies. Seriously, it’s so perfect its almost a caricature. It’s also where I write.
Do you have any advice for other writers?
Best advice I got, and I don’t know who to attribute it to, is to write what you like to read. If you enjoy your own writing, then there are some other people out there who will enjoy it too.
Smashwords Interviews are created by the profiled author or publisher. 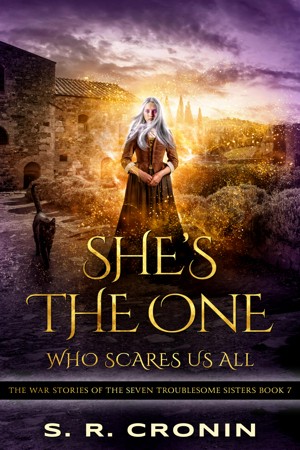 She’s the One Who Scares Us All by S. R. Cronin
Pre-release—available December 2, 2022. Price: $3.99 USD. Language: English. Categories: Fiction » Alternative history, Fiction » Fantasy » Historical
Iolite, the youngest of seven sisters, has a rare condition that scares many. When she forges a connection with a roving army on horseback, she learns that they plan to invade her homeland. Once a secret cabal inside of Ilari’s army imprisons Iolite to force her to provide information, Iolite wonders how much she owes them. What she does once she is freed will determine the fate of her people. 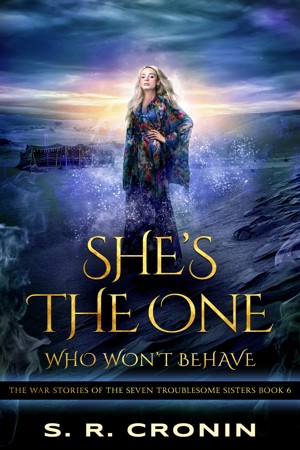 She's the One Who Won't Behave by S. R. Cronin
Price: $3.99 USD. Words: 69,450. Language: English. Published: July 14, 2022. Categories: Fiction » Alternative history, Fiction » Fantasy » Historical
As the date of the Mongols’ return draws near, Ilarians must work together if they are to have any hope of surviving. Gypsum, the sixth of seven sisters, has joined the reczavy, a group living on the edge of the desert and known for their sexual promiscuity and playful ways. Now she will need to coax this recalcitrant group into becoming life-saving warriors of a very different kind. 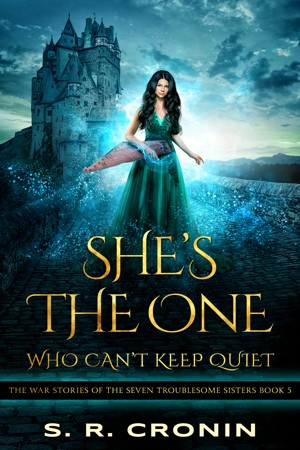 She's the One Who Can't Keep Quiet by S. R. Cronin
Series: The War Stories of the Seven Troublesome Sisters. Price: $3.99 USD. Words: 72,510. Language: English. Published: January 21, 2022. Categories: Fiction » Fantasy » Historical, Fiction » Historical » Medieval
Celestine, the fifth of seven sisters, is the family beauty and a talented musician, but she hides her love for another woman beneath her public persona. She struggles to inspire her fellow citizens once she learns an invasion of her country looms. 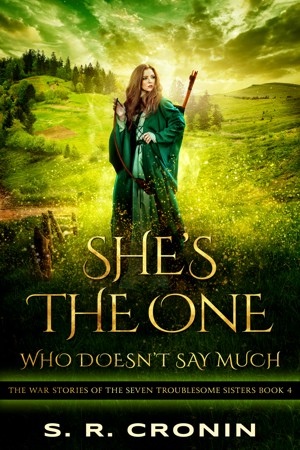 She's the One Who Doesn't Say Much by S. R. Cronin
Series: The War Stories of the Seven Troublesome Sisters. Price: $3.99 USD. Words: 72,200. Language: English. Published: August 19, 2021. Categories: Fiction » Fantasy » Historical, Fiction » Alternative history
A 13th-century artist meets an impoverished man who understands her. She wants to run away with him and paint all day, but her country faces an invasion and her unusual visual powers hold a key to her realm’s defense. Then the artists she admires decide her realm must surrender to the invaders to survive. Those who don’t agree are no longer welcome. Olivine must pick where her future will lie 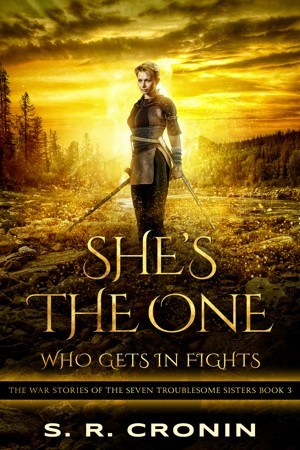 She's the One Who Gets in Fights by S. R. Cronin
Series: The War Stories of the Seven Troublesome Sisters. Price: $3.99 USD. Words: 72,650. Language: English. Published: May 22, 2021. Categories: Fiction » Fantasy » Historical, Fiction » Historical » Medieval
A 13th-century woman spends her life training to join her nation’s army. Once she succeeds, an invasion looms and she learns parts of the realm won’t be defended, including the one where her family lives. Is her loyalty with the military she’s always admired? Or is it with her sisters, who plan to defend their homeland with magic? Everyone is counting on her to fight for what’s right. But what is? 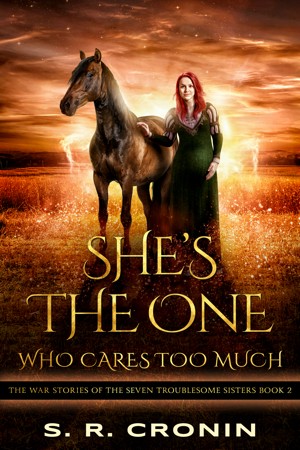 She's the One Who Cares Too Much by S. R. Cronin
Series: The War Stories of the Seven Troublesome Sisters. Price: $3.99 USD. Words: 71,490. Language: English. Published: February 20, 2021. Categories: Fiction » Fantasy » Historical, Fiction » Historical » Medieval
A tenderhearted 13th-century woman discovers her betrothed heroic army officer is not what she thought, and she’s pregnant. As her homeland prepares for a Mongol invasion, she finds she possesses a mythical power that scares everyone but could save the realm. Can she raise a baby, placate an absent military husband who thinks he’s stopping this invasion, and save her homeland? 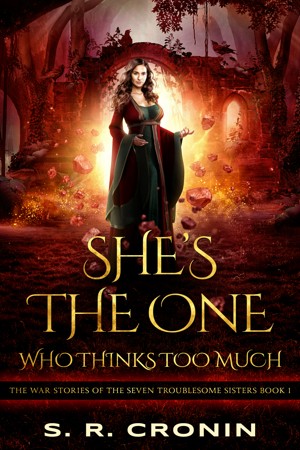 She's the One Who Thinks Too Much by S. R. Cronin
Series: The War Stories of the Seven Troublesome Sisters. Price: $2.99 USD. Words: 71,370. Language: English. Published: November 13, 2020. Categories: Fiction » Fantasy » Historical, Fiction » Women's fiction » Feminist
A highly-educated 13th-century woman discovers the prince she loves may sacrifice her homeland when the Mongols invade. Devastated, she turns to her six sisters, the tough farmers she grew up with, and her own growing powers of telekinesis as she and the helpful witches of the forest devise a strategy to save them all. Will it work? Maybe. It’s certainly what happens when a woman thinks too much. 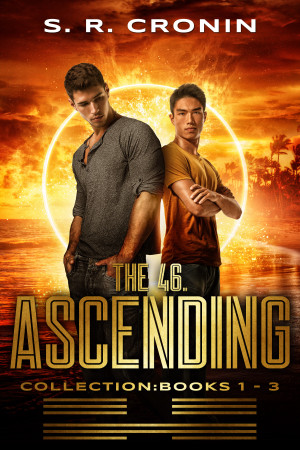 The 46. Ascending Collection: Books 1 -3 by S. R. Cronin
Price: $9.99 USD. Words: 267,950. Language: English. Published: June 27, 2020. Categories: Fiction » Fantasy » Contemporary, Fiction » Science fiction » Adventure
Would you like to take an extraordinary journey? In this three-book collection, three family members will each discover superpowers so real you’ll feel as if you are developing them, too. 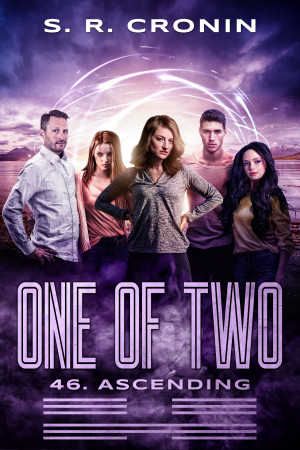 One of Two by S. R. Cronin
Series: 46. Ascending. Price: $4.99 USD. Words: 121,140. Language: English. Published: December 20, 2017. Categories: Fiction » Science fiction » Adventure, Fiction » Fantasy » Contemporary
Everyone in the secret organization x0 would admit telepathy creates as many problems as it solves. Those problems worsen when budding psychic Lola discovers another group of telepaths helping a powerful media empire. This group is willing to destroy anyone capable of challenging them. Can the talented people Lola cares about learn to trust each other and work together in order to save the world? 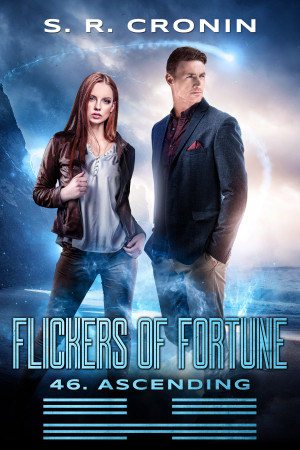 Seeing the future is a nuisance. Ariel does her best to shut it out, until she stumbles on a group of clairvoyants using their talents to get rich. Then she meets a second bunch obsessed with surviving an upcoming near extinction event. Both factions seem dangerous and a little crazy. They don’t get along, and each thinks Ariel’s particular abilities are hard to find and exactly what they need.
View their profile to see all of their books