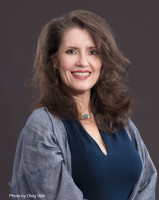 Published 2018-11-01.
Do you remember the first story you ever wrote?
Yes. I was about twelve years old (I think) and I submitted it to a very small newsletter called The Plutonian Society. It was very short (what today we'd call "flash fiction") and I think I got $5 for it. I was very excited because that was more than the money I was making babysitting the neighbor's baby and because I got paid with (gasp!) a check. It was a vignette about an astronaut's dying thoughts as his spaceship was about to crash. I don't think I'd write anything that dark or depressing ever again. I like happy endings and heroes winning.
What is your writing process?
In "the trade" it's called "pantsing," as in "writing by the seat of your pants" mostly because it's not outlining. While I've worked off outlines, I don't start with them. Usually I start with either a setting or a character or a problem. I rarely sit down without any idea of what I'm about to write (what some would call "discovery writing), although the few times I've done it, it has resulted in some good pieces.

Most of the time I've lived with the story, in some form or another, for awhile. I've either thought of or about either the character, the setting, or the problem and written out bits of conversation or summary paragraphs. At some point I know I'm ready to expand on these bits and pieces and bring them together in a cohesive story.

I marvel at the process because as I flesh out the story, I come up with the most marvelous details, things that would never come to me if I had written myself an outline. I know I'm solidly in a character's head when the words flow. Sometimes the character wants to take me in a different direction than what I originally had in mind, and for the most part, I let him.

Imagine watching a film that starts out in black and white, out of focus, grainy. Then, as the story goes, pieces fall into place, bringing rich, thick, detail and emotion. The character grows a personality, a voice, a mind of her own. The setting flows from black and white into rich color. The focus sharpens and the resulting image is no longer grainy but highly detailed, like you can touch it. You, the reader, are inside that character's mind, feeling their feelings with them, experiencing the world through their eyes. Creating characters and worlds that are that real is my goal when I'm writing.
Do you remember the first story you ever read, and the impact it had on you?
It was Journey to the Center of the Earth. And it wasn't a kid's book. It was a Romanian translation of the original. It made a very profound impression on me because until I read it (it was contraband) I had not read anything but material approved by the Communist Party under Ceaucescu's regime. So the only things I'd read until then were stories written by Soviet and communist officials, all designed to teach us how wonderful government was, how glorious our leaders were, and how evil capitalism and the West was. Every story was a parable that made the communist man or woman a hero to all. Essentially, I had grown up reading nothing but communist propaganda. So to read something as wonderful as a real story with real heroes, with adventure, well, it was amazing. I must've read it five or six times in a row before I had to give it back. And I read it in my hidey-hole in the cellar by candlelight and when I put it away I wrapped it in sack cloth and hid it under a loose plank.
How do you approach cover design?
Genre, genre, genre. I like for my covers to scream genre to the reader. I want them to know what they are getting with one look.
What are your three favorite books, and why?
1. I've read Lois McMaster Bujold's Barrayar again and again, to the point where the spine was coming apart. In fact, I think I went through at least three paper versions of that book. I love Cordelia and Aral. They are the perfect love story. And it's not just a love story, it's a love story in a science fiction setting with feudal flavorings added in. I loved the Russian and Greek elements because they echo my own heritage. I loved the idea of counts and emperors in space. I loved the politics and the dynastic entanglements. But most of all, I loved that Cordelia didn't have to be the meanest, toughest, smartest person in the room. That's one of my pet peeves with female characters today--they are written not as women, but as men. I think this sends a very bad message: that only masculine qualities have value. I disagree. We each have our own strengths and we should savor those differences.

2. I've read John Ringo's Ghost almost as many times as I've read Barrayar. I fell in love with Michael Harmon, the anti-hero protagonist because of the inner struggle Ringo portrayed so skillfully. Harmon has a dark side he reins in. He can be a monster, but chooses not to be. He has no illusions about who and what he is, nor about what he does. He does what's needed even at great personal cost and he's not afraid if it costs him his soul, because someone has to do it. His choices, his actions, leave the world a better place, even if eventually they condemn him to Hell. THAT is the definition of a true hero.