Christine studied creative writing at Baldwin Wallace Collage and Cleveland State University. Her short stories have been finalists for Perigee Publication for the Arts and The Fish Short Story Prize.

What inspired your mystery thriller Anonymous?
The story in my novel Anonymous was inspired by my 100-year old farmhouse where distant neighbors have have said it’s haunted. Of course that was after I moved into the fourteen-room house amid fifty acres of pokeweed and thistle and blackberry barbs. The slightest breeze would moan in a different pitch through each of the four-paned windows. You could hear footsteps when no one was there, scratching from inside the walls. Lights would flicker and then go out. I kept the rifle handy when I first moved in, all alone with a baby and a five-year-old while my husband was working overtime. There was nothing but farmland in every direction, as far as the eye could see. And there were times I thought I was crazy, trying to rationalize how the wind played tricks on her with the house. A south wind would set a shutter to flapping which I could have sworn was bare feet pit-patting on a bare floor. A west wind would stir up mortar pieces that fell into the chimney, unlike anything I’d ever heard. And a north wind would blow the catalpa tree branches against the windows upstairs which bore the resemblance to someone walking up there. That’s how my husband saw it, so I wanted it to be true.

The basement was another story. The quarry-stone walls were pitted blocks of sandstone, circa 1875, looking very much like a dungeon. It irked me that the laundry room was downstairs, a place where spiders beget generations of spiders. No matter how much I’d pleaded to have it anywhere else, that’s where all the wiring was. I made due, broom-scrubbing the quarry stone walls with a bleach solution, vacuuming the unfinished ceiling. Within no time at all spiders came back in full force - hanging from the ceiling, spinning spider sacks between water pipes overhead. There were times I took a broom down there and wound spider webs like cotton candy. I tried spraying spiders one at a time with ant killer spray, but had one spin down its web and land on me. I know it died somewhere in the middle of my tribal dance, a dance that I’d perfected. Bug bombs would work for a while; but every three months a new batch of spiders would migrate back to their old breeding ground.

I’ve been asked why I stayed there, which is pretty much like asking a homeless person why they live in their car. We didn’t have much money. My husband worked for his father who was from the old country. Many Europeans believed their children are their sole support as my father-in-law had. And paid him very little. The overtime my husband worked was for our family - he’d started his own company. I knew there were sacrifices and I was ready to make them for a brighter future.The plan was to rebuild the farmhouse and sell it for a decent house. And we did just that. The kids were grown by then, and still swear the house is haunted.

The anonymous letters came several years later. I had quit my job as a waitress in an upscale restaurant where a man said I had waited on him. He said we had a connection. I didn’t know I had made a connection with anyone. Anonymous letters came all summer that year, creepy letters from this man who ended up stalking me. He said he had sexual fantasies about me and told me he was watching me, following me. My husband destroyed most of the letters in anger, but I kept some of them just in case I would need them in a court of law. In case he did something bad to me. Yes it was a frightening time in my life, so frightening that even when the letters stopped it took me ten years to feel safe enough to open the blinds in my house again. To this day he remains anonymous.

There were times I wasn’t sure if I was more afraid of the house or the stalker. Over the years when the house seemed to accept me or I accepted the house, when the stalker seemed to fade into my past, I thought of this story and called it Anonymous. It’s not all true. But then ... some of it is.
When did you know you were going to be a writer?
I’ve always been a story teller, and living where wolf spiders would hide in the sheets and snakes would hide in the laundry, there’s been plenty to tell. Writing came naturally for me, even at a young age. It was my favorite subject in school. The funny thing is my teachers had passed my writing assignments to other teachers throughout the school system, something I hadn’t known till now.

It wasn’t until my husband had broken his foot that I spent some serious time at the keyboard. He had this incessant bell. I went to the farthest room in the fourteen-room house, upstairs, where my stories took on a life of their own.

Where to find Christine Benedict online 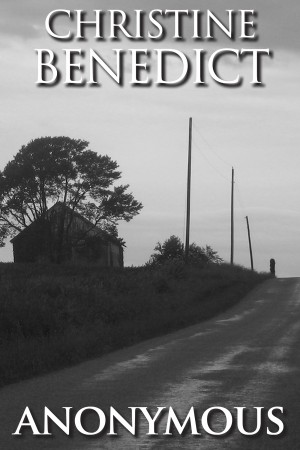 Debra Hamilton confronts the fear of inheriting mental illness when her husband moves her into a hundred-year-old farmhouse on fifty-three acres of blacklisted real estate property. Floorboards creak when she's alone. Objects appear and disappear. Neighbors insinuate the house is haunted but memories of her mother's schizophrenia make her wonder.

You have subscribed to alerts for Christine Benedict.

You have been added to Christine Benedict's favorite list.

You can also sign-up to receive email notifications whenever Christine Benedict releases a new book.