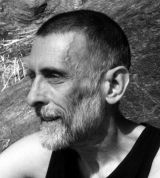 Clive Johnson was born in the mid-1950’s in Bradford, in what was then the West Riding of the English county of Yorkshire. Mid-way through the 1970s, he found himself lured away by the bright lights of Manchester to attend Salford University.
In addition to getting a degree in electronics, he also had the good fortune of meeting Maureen (Kit) Medley - subsequently his partner and recent Editor. Manchester retained its lure and has thereafter been his hometown.
Torn between the arts (a natural and easy artist) and the sciences (struggled with maths), youthful rationality favoured science as a living, leaving art as a pastime pleasure. Consequently, after graduation, twenty years were spent implementing technologies for mainframe computer design and manufacture, and being a Group IT Manager for an international print company.
The catalyst of a corporate takeover led to a change of career, and the opportunity to return to the arts. The unearthing of a late seventies manuscript - during loft improvements - resurrected an interest in storytelling, and one thing led to another. A naïve and inexpert seed finally received benefit of mature loam, and from it his first novel - Leiyatel’s Embrace - soon blossomed.

You have subscribed to alerts for Clive S. Johnson.

You have been added to Clive S. Johnson's favorite list.

You can also sign-up to receive email notifications whenever Clive S. Johnson releases a new book.