Dakota Franklin was born in Palo Alto, CA, the daughter, granddaughter and great-granddaughter of automobile engineers. It was therefore predictable that she would become an engineer. Her mother, an educationalist, didn't believe in putting children in boarding schools, so Dakota travelled the world, wherever her father consulted. By the time she was ten she could swear fluently in every European language, and carry on a conversation in all the major ones.

After college at Stanford and MIT, and further postgraduate studies in France, Germany and Italy, she worked on jet engines for Rolls-Royce, for Ford and Holden (GM's Australian branch) on high performance vehicles (HPV), then joined her father and grandfather in the family consulting business, where she has specialized in high performance machinery. She has since worked on contract or as a consultant with all the major automobile makers with a racing or HPV profile, and in powerboat and propellor plane racing. She insists racing regulators around the world love her, whatever they may say behind her back!

Dakota started writing in 1996 when a painful divorce coincided with a testing incident that put her in hospital for several even more painful months. After a false start which resulted in having to trash three complete novels, she finally acquired the right creative writing guru, and started creating the series RUTHLESS TO WIN.

She lives in Switzerland with her husband, an inventor, and drives or flies to the motor cities for her current consulting projects. She has one child, a teenager who travels with her and whose eclectic schooling has turned her into a linguist, just like her mother, but who has no intention of becoming an engineer.

Dakota says, "I'm finally happy. Fulfilled may not be too large a word."

Where to find Dakota Franklin online

Ruthless to Win by Dakota Franklin
RUTHLESS TO WIN is a best-selling, award-winning series by Dakota Franklin, "the queen of racing scribes", very popular with racers, fans and reviewers for its realism, thrills and straightforward good story about appealing characters. RUTHLESS TO WIN comprises a set of self-standing, self-contained novels of suspense, set against the glamorous, dangerous background of international auto racing, that can be read in any order. Each thriller is about a different central character but all work for the auto racing house of the ruthless Jack Armitage, premier racing entrant of the world. 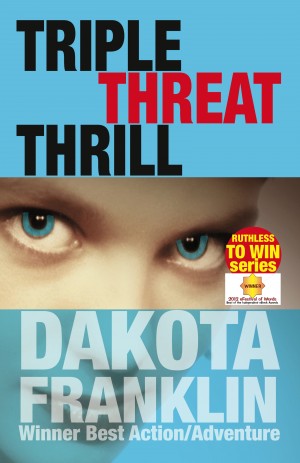 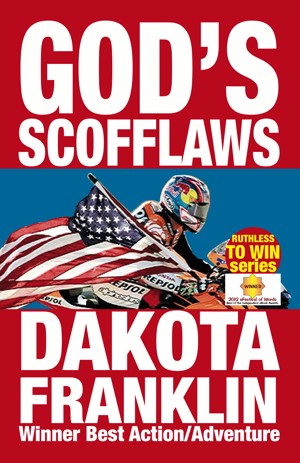 God's Scofflaws by Dakota Franklin
Series: Ruthless to Win. Price: $4.99 USD. Words: 160,240. Language: English. Published: May 15, 2014. Categories: Fiction » Thriller & suspense » Action & suspense, Fiction » Adventure » Action
On the Isle of Man for the TT, Grant discovers that his motorbike racing team’s trucks will be used to carry bombs into Britain. Then the terrorists take the love of his life hostage to control him and everything explodes in uncontrolled violence. "A wonderful story full of action and remarkable detail." — Boyd S Drew 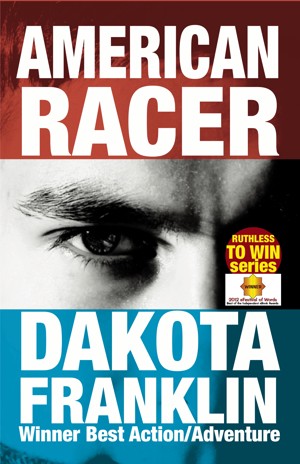 American Racer by Dakota Franklin
Series: Ruthless to Win. Price: $4.99 USD. Words: 108,830. Language: English. Published: February 28, 2014. Categories: Fiction » Thriller & suspense » Action & suspense, Nonfiction » Sports & outdoor recreation » Motor sports
“Yes, I know, I sneer at the psychopaths I compete against on tracks. But I just hide my own nature better under a veneer of cool intelligence and urbane good manners. Attack my child or my women, and I will kill you. Slowly. And my sleep will not be delayed one minute by your demise.” — Bobby Solara in AMERICAN RACER by Dakota Franklin 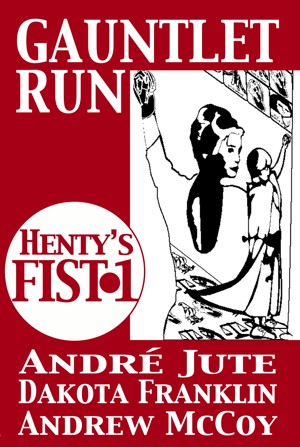 HENTY’S FIST 1: GAUNTLET RUN Birth of Superhero by André Jute, Dakota Franklin, Andrew McCoy The Gauntlet Run is the toughest race ever run by man: across America with every man’s hand turned against you from the statue of Liberty to the old US Mint in San Francisco. There the prize awaits you: $10 million and a full and free Presidential Pardon. No woman has ever Run the Gauntlet... 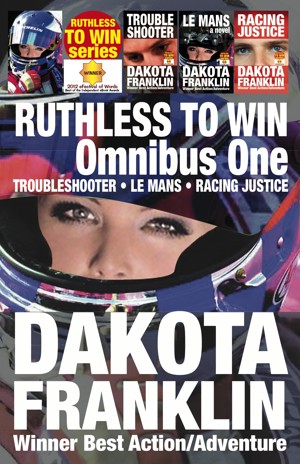 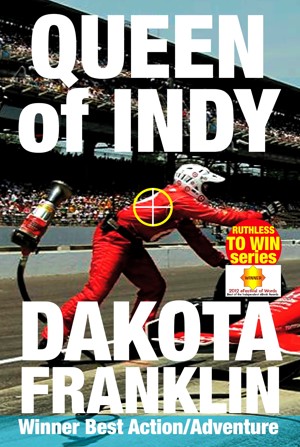 Queen of Indy by Dakota Franklin
Series: Ruthless to Win. Price: $4.99 USD. Words: 144,650. Language: English. Published: February 17, 2014. Categories: Fiction » Thriller & suspense » Action & suspense, Nonfiction » Sports & outdoor recreation » Motor sports
Alongside its terrifying thrills, QUEEN of INDY counts among its other excitements a super love story and a seamlessly integrated insider’s look at the creation of a great auto racing team to contest the greatest automobile race in the world. As expected in every Dakota Franklin thriller, QUEEN of INDY abounds in sharply drawn characters on the edge of psychopathology—or over it. 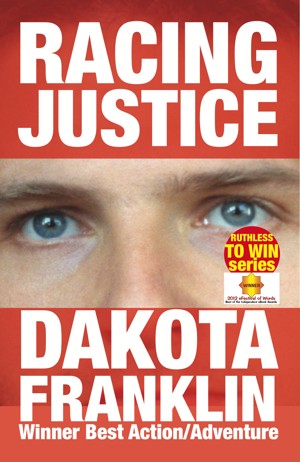 Racing Justice by Dakota Franklin
Series: Ruthless to Win. Price: $4.99 USD. Words: 122,980. Language: English. Published: February 17, 2014. Categories: Fiction » Thriller & suspense » Courtroom, Nonfiction » Sports & outdoor recreation » Motor sports
In a year which will change Simon Aron’s life forever, his friendship and loyalty will be tested by every woman he ever knew, and one will betray him. Mallory, an old girlfriend with whom he raced a Cobra while they were at college, has been kidnapped by a brutal mobster in the pay of Fred Minster to keep her out of Le Mans, the top endurance race in the world. 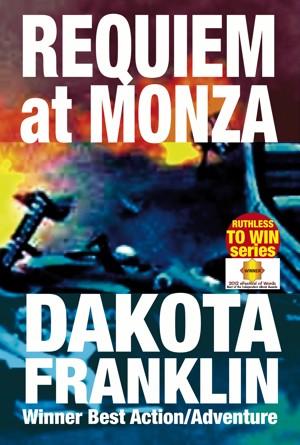 Requiem at Monza by Dakota Franklin
Series: Ruthless to Win. Price: $4.99 USD. Words: 140,390. Language: English. Published: November 13, 2012. Categories: Fiction » Mystery & detective » Women Sleuths, Nonfiction » Sports & outdoor recreation » Motor sports
136,000 words Requiem at Monza by Dakota Franklin CoolMain Press “There is something about me you should know, Ludo. I try hard for what you might call sophistication, but underneath the veneer I’m a barbarian. My violent instincts have been nurtured, trained, honed to perfection by my family, my community, my government and my peers, for instant, mindless application.” 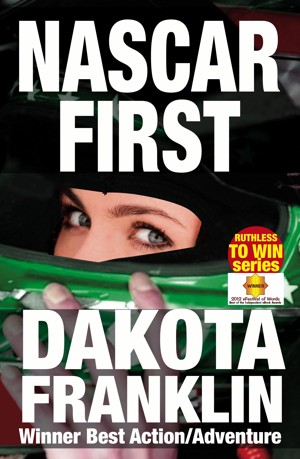 NASCAR First by Dakota Franklin
Series: Ruthless to Win. Price: $4.99 USD. Words: 143,480. Language: English. Published: November 13, 2012. Categories: Fiction » Adventure » Action, Nonfiction » Sports & outdoor recreation » Motor sports
• Dakota Franklin WINS Best Action/Adventure at Best Independent EBook Awards "I sniffed the air but the smell of my brother’s burned flesh was long gone. I’ve made my living driving fast cars since before I reached puberty; dying in mangled metal is a thought that after a while numbs itself on its own banality. It no longer bothers me that I am not like other girls." 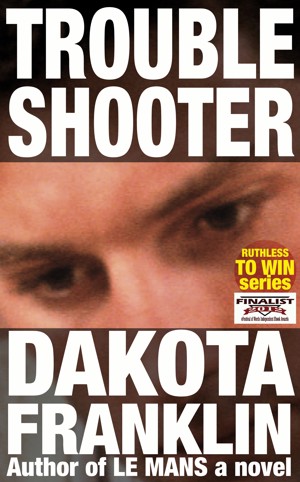 Troubleshooter by Dakota Franklin
Series: Ruthless to Win. Price: $4.99 USD. Words: 113,610. Language: English. Published: August 6, 2012. Categories: Fiction » Thriller & suspense » Action & suspense, Fiction » Thriller & suspense » Crime thriller
On the Sunday before the start of the grand prix season, I went to two parties and committed a criminal conspiracy with the woman of my dreams. Monday I started on the slippery slope that would end when I learned that my friend betrayed me. Tuesday I intimidated the most powerful and least accountable government department of a sovereign democracy. Wednesday someone tried to kill me. 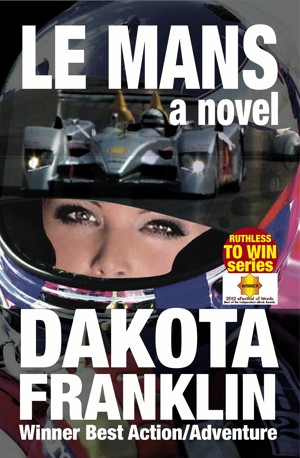 LE MANS a novel by Dakota Franklin
Series: Ruthless to Win. Price: $4.99 USD. Words: 170,750. Language: English. Published: March 19, 2012. Categories: Fiction » Thriller & suspense » Action & suspense, Fiction » Thriller & suspense » Crime thriller
“On the track a racer has no friends.” Mallory, a crashed-out, half-dead, never-has-been auto racer, gets one last chance when triple Le Mans winner Charlie Cartwright hires her as an engineer at Cartwright-Armitage. Now she’s on the fast track as an engineer, an executive, a driver — in a winning car! She even has a man she can love. She can be a winner, or she can go down in flames. Literally.

You have subscribed to alerts for Dakota Franklin.

You have been added to Dakota Franklin's favorite list.

You can also sign-up to receive email notifications whenever Dakota Franklin releases a new book.