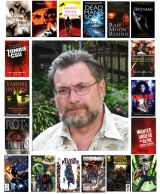 His nonfiction works include: VAMPIRE UNIVERSE (Citadel Press, 2006), THE CRYPTOPEDIA (Citadel, 2007 –winner of the Bram Stoker Award for Outstanding Achievement in Nonfiction; co-authored by David F. Kramer), ZOMBIE CSU: The Forensics of the Living Dead (Winner of the Hinzman and Black Quill Awards and nominated for a Stoker Award; 2008), THEY BITE! (2009 co-authored by David F. Kramer), WANTED UNDEAD OR ALIVE (2010 co-authored by Janice Gable Bashman), and THE VAMPIRE SLAYERS FIELD GUIDE TO THE UNDEAD (2001, written under the pen name of Shane MacDougall).

He writes a variety of projects for Marvel Comics involving CAPTAIN AMERICA, BLACK PANTHER, DOOMWAR, WOLVERINE, DEADPOOL, THE X-MEN, FANTASTIC FOUR, the NY Times bestselling MARVEL ZOMBIES RETURN, and THE MARVEL UNIVERSE vs THE PUNISHER. All of Jonathan’s comic book collections are released as Graphic Novel collections within a month or two of individual comic publication.

Jonathan is the co-creator (with Laura Schrock) of ON THE SLAB, an entertainment news show in development by Stage 9 for ABC Disney / Stage 9. He was also a ‘blog correspondent’ on Sony’s zombie-themed web show ‘WOKE UP DEAD’; and a recurring character on Laura Schrock’s ‘IT’S TODD’S SHOW’.

Jonathan was the Executive Director of the Writers Room of Bucks County (2005-06) and co-owner of the Writers Corner USA (2006-2009). Jonathan regularly visits local middle schools, high schools and colleges to talk about books, reading, publishing and the writing life.

On the last Sunday of every month Jonathan hosts the Writers Coffeehouse, a free three-hour open-agenda networking and discussion session for writers of all genres and levels of skill. The event is held at the Barnes & Noble in Willow Grove Pennsylvania.

Jonathan has been a popular writing teacher and career counselor for writers for the last two decades. He teaches a highly regard series of classes and workshops including Write Your Novel in Nine Months, Revise & Sell, Experimental Writing for Teens, and others. Many of his students have gone on to publish in short and novel-length fiction, magazine feature writing, nonfiction books, TV, film, and comics.

Where to find Jonathan Maberry online

You have subscribed to alerts for Jonathan Maberry.

You have been added to Jonathan Maberry's favorite list.

You can also sign-up to receive email notifications whenever Jonathan Maberry releases a new book.