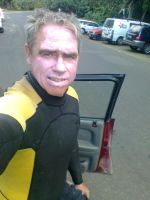 Lachlan Barker is an author who lives in Byron Bay, Australia.
When not constantly complaining on the internet, he surfs, cycles or works as a gardener.
He entered rehab for booze and pot in 2008 and hasn't looked back since.
He has been on every continent except South America and Antarctica, and they're next.

When did you first start writing?
I first began writing in a remotely serious way in the late nineties, while working as a computer programmer.
Already I was dissatisfied with the life in front of the screen and sought something different.
I was in love with the idea of living as a freaky beatnik in a mud brick hut on the coast of Australia, so I wrote a book after work called, 'How not to Build A Mud Brick House'.
I rang a publisher but they said "we only take manuscripts if they come from a literary agent", so I got out the phone book, and rang the first agent in the Yellow Pages, they said, "we only take you on if you've already been published".
So then I gave up on the idea until I heard about Smashwords.
What's the story behind your latest book?
It all started with a letter I wrote to my friend Pat all about a four day trip from Jakarta on the island of Java in Indonesia to Padang Sumatra.
The trip should take 24 four hours travel time, all going well, but of course it didn't, quite the reverse.
My letter to Pat ended up being 26 hand written foolscap pages.
Pat said I could be the next Clive James, that was praise indeed.
I'm nowhere near that good, but I appreciated the comment.
But then when i got to the end of that little piece of wiriting and put it on my blog, many of my friends asked 'what happened next?', and so i continued until, 75,000 words later, and with Europe, Britain and the Phillipines visited, I had written a book.
Read more of this interview.

Year of the Rant. by Lachlan Barker

Year of the Rant. Part Two: The Winter of Our Discontent, Winter, 2013.
Price: Free! 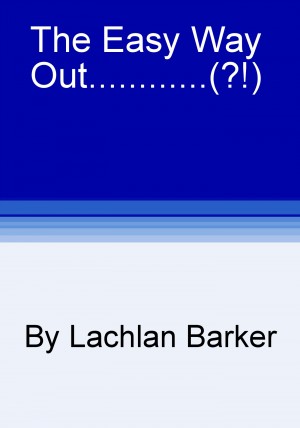 The Easy Way Out......(?!) by Lachlan Barker
Price: Free! Words: 8,840. Language: English. Published: November 20, 2014. Categories: Fiction » Humor & comedy » Black comedy
If only Jarryd had decided to become a writer in the first place there wouldn't be a shot gun blast hole in the wall of his apartment, and his ceiling joists would still be in place. He also would still have his car, and who knows, maybe Anya wouldn't have left him, which started all this. 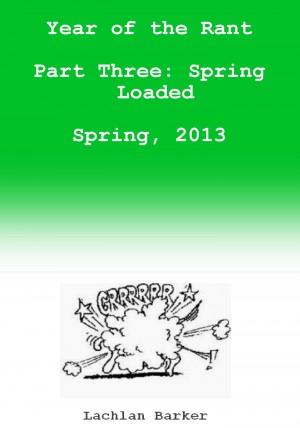 Year of the Rant. Part Three: Spring Loaded, Spring, 2013 by Lachlan Barker
Series: Year of the Rant., Book 3. Price: Free! Words: 26,770. Language: English. Published: April 11, 2014. Categories: Nonfiction » Politics & Current Affairs » World politics
This is the third part of the 'Year of the Rant' Series. The latest collection of posts from Lachlan's blog. It's all here: the fight for the environment, politics, commercial TV. It all comes within the ambit of Lachlan's fury. Send it to a friend as a gift? But only do this if you want your friends to know you are a total cheapskate. 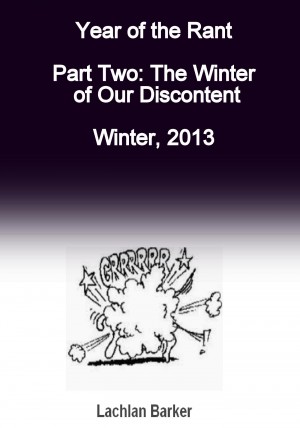 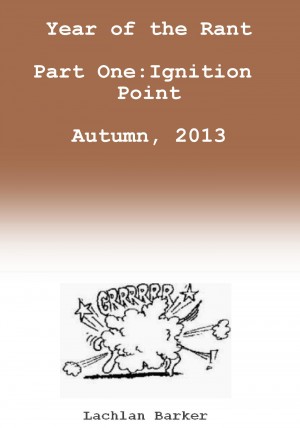 Year of the Rant. Part One: Ignition Point, Autumn, 2013. by Lachlan Barker
Series: Year of the Rant., Book 1. Price: Free! Words: 21,460. Language: English. Published: February 22, 2014. Categories: Nonfiction » Politics & Current Affairs » Government
Lock's Blog, collected into a four part book, this being part one. Follow along over a year of increasingly incandescent raging at the machine, from the Australian Federal Government to the Republicans and the Tea Party in the US. 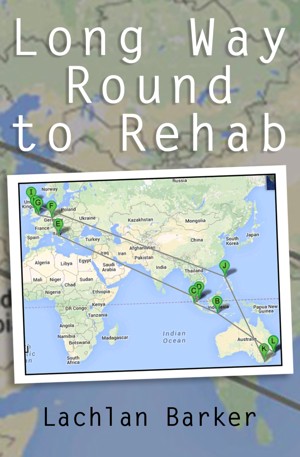 You have subscribed to alerts for Lachlan Barker.

You have been added to Lachlan Barker's favorite list.

You can also sign-up to receive email notifications whenever Lachlan Barker releases a new book.