A.B.Wells is the living embodiment of chaos theory being the mother of four children, three of whom are that particularly alien species called boys. She writes comedy sci-fi, science inspired and literary fiction. As Alison Wells her more literary writing has been shortlisted in the prestigious Bridport, Fish and Hennessy Awards and she’s been published or is about to be in a wide variety of anthologies and e-zines, including the Higgs Boson Anthology by Year Zero, Metazen, The View from Here, Voices of Angels by Bridgehouse and National Flash Fiction day’s Jawbreakers. She recently won the fiction category of the Big Book of Hope ebook with a flash fiction medley.

She blogs for writing.ie in the guest blog: Random Acts of Optimism. One of the as yet unsolved mysteries of the universe is whether the B in A. B. Wells stands for barmy or brilliant.

In her former life she worked, among other things, as a clerk like Albert Einstein, as a technical writer (and a HR. Manager) and before that studied psychology and communications where, in the college library James Gleick’s book Chaos fell on her head. Her ambitions include a desire to travel to see the Northern Lights and to take a spin in a Tardis.

Where to find A.B. Wells online 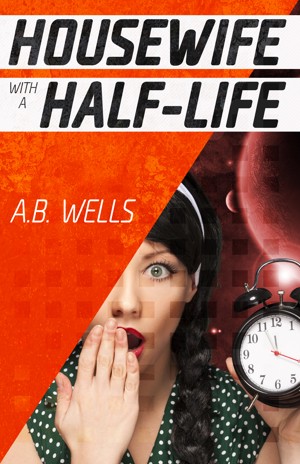 Housewife with a Half-Life by A.B. Wells
Price: $2.99 USD. Words: 100,560. Language: English. Published: May 5, 2012. Categories: Fiction » Science fiction » General
A Housewife's answer to the Hitchhiker's Guide to the Galaxy! In this lively space comedy, Susan Strong and her spaceman guide Fairly Dave dodge entropy hoovers, Geezers with Freezers, the Super Gnome and the Spinner's cataclysmic converter on a mission to retrieve the lost pieces of the housewife's disintegrating self across parallel universes. Can they save us all from Universal Devastation?

You have subscribed to Smashwords Alerts new release notifications for A.B. Wells.

You have been added to A.B. Wells's favorite list.

You can also sign-up to receive email notifications whenever A.B. Wells releases a new book.