Jon Krampner is a political activist who was horrified by the myriad depredations of what Gore Vidal called "the Cheney/Bush junta." He has written this 9,000 word e-book, thoroughly annotated with 124 footnotes, to serve as a concise account of Plamegate, Bushco's vindictive and illegal outing of Joe Wilson's wife Valerie Plame as payback for his having written "What I Didn't Find in Africa," which exposed Bushco's willful falsehoods about the need for the Iraq War. Mr. Krampner lives in Los Angeles.

What are your politics?
I'm a leftish independent. I've been burned too many times by the corporatism and Republican-enabling of the Democratic Party to consider myself a Democrat any longer, although I sometimes vote for individual Democrats when I feel it makes sense to do so.
Did you do any original research for this e-book?
I conducted two lengthy interviews with Joe Wilson, one by telephone, and one in person when he and his wife were in Southern California as part of a distinguished speakers series. I also swapped e-mails with him, Valerie Plame Wilson, and Marcy Wheeler, the author of "Anatomy of Deceit."

Originally, I had hoped to interview the Wilsons in New Mexico, but came down with the flu on the Amtrak to Albuquerque, and didn't want to share my germs with them.

I also read many of the key articles about Plamegate, as well as Joe Wilson's book "The Politics of Truth," Valerie Plame's "Fair Game," Marcy Wheeler's "Anatomy of Deceit," Murray Waas' "The United States v. I. Lewis Libby" and the Report of the Senate Select Committee on Intelligence on the U.S. Intelligence Community’s Prewar Intelligence Assessments on Iraq.
Read more of this interview.

Where to find Jon Krampner online 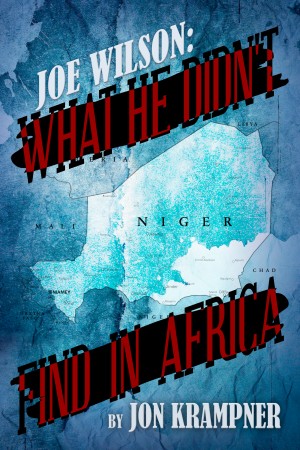 You have subscribed to Smashwords Alerts new release notifications for Jon Krampner.

You have been added to Jon Krampner's favorite list.

You can also sign-up to receive email notifications whenever Jon Krampner releases a new book.