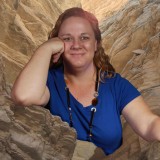 Julie was born and raised in the East Bay Area, California. Four years after high school, she earned a BA in English. Later, she returned for an MFA in Media Design—when her five kids were ages 6-14. She currently battles hormones and meltdowns from her four daughters, and threatens to tie her son down so he’ll hold still, and hears enough voices in her head to necessitate indulging in her first passion—multi genre writing.

OK, maybe multi genre reading came first, but writing followed quickly after, and word got out that she’s a talented author and crack editor. Now a book reviewer and copyeditor for InD’tale Magazine, occasional designer of logos, book covers, and editor for other authors, she’s also gone back to her third love, teaching—but did it her own way, by teaching adults who never finished school—focusing on reading and writing. She might be just this close to insane.

The name Julie L. York is for anything fantasy, paranormal, science-fiction, historicals...
The name Julie King York is specific to Christian/religious...

When did you first start writing?
I have a vivid memory from about 4th grade, 9 or 10 year old or so, sitting at my desk in my bedroom, looking outside my corner windows. I had a story in my head but, for some unknown reason, I was trying to tell it in poetry form. (Yes, I still write poems, and lyrics.) It had to do with the ability to conjure and summon lightning and having it hit the large trees in my back yard. It was a perfectly clear day, and lightning terrified me. Don't ask. I was a weird kid. I've never stopped writing since, even if the stories got thrown away.
Who influenced your writing?
This is easy. Roy Hagar and Joyce Welch, my 10th, 11th, and 12th grade English teachers. In 10th grade I was struggling with going outside my comfort zone. I didn't like where I was, but had no idea how to grow. Mr. Hagar challenged me to view the Bible as literature, which was offensive at the time, because it was sacred scripture. I fought it for a bit, then opened my mind to the lyricism of King David and storytelling of Isaiah and Job. I didn't learn sacred truths, but I learned that truth can be written beautifully. He was also my 12th grade English teacher, when I was SO done with high school. He graded me against myself, which I asked him to do, and it wasn't easy getting those A's. He could tell when I was calling it in, full of crap, and wouldn't let me get away with it. Because of him, I always do my best when writing anything. The first time.

In 11th grade, Ms. Welch had us write eight to ten essays and stories throughout the year. There were guidelines, but she allowed me the freedom to find my voice through experimentation on each essay. She even gave me an A on an essay I made up because I had written such a convincing story about what a rotten teen I was outside school. She'd believed me, until my last sentence told her it was all made up. Without her in-class freedom to find out how I wrote best and play with styles, I wouldn't have my voice... and just like singing, having a strong voice as a writer is more important than grammar and sentences.
Read more of this interview.

You have subscribed to alerts for Julie L. York.

You have been added to Julie L. York's favorite list.

You can also sign-up to receive email notifications whenever Julie L. York releases a new book.