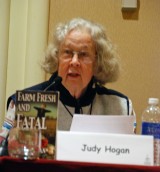 Judy Hogan has lived in North Carolina and in the Triangle area for 44 years. She brought to the state a new poetry journal (Hyperion, 1970-81) and in 1976 she founded Carolina Wren Press. She has been active in the area since the early 70s as a reviewer, book distributor, publisher, teacher, writing consultant, and organizer of conferences, readings, and book signing events. She was Chair of COSMEP (Committee of Small Magazine Editors and Publishers) 1975-78. In 1984 she helped found and was the first President of the N.C. Writers' Network, serving until 1987.
Her first mystery novel but the 6th written, Killer Frost, was published by Mainly Murder Press in 2012. Farm Fresh and Fatal, 7th in the Penny Weaver series came out in 2013. The Sands of Gower: The First Penny Weaver Mystery is due out December 1, 2015. She has published six volumes of poetry with small presses, and two prose works. Her papers, correspondence, and 25 years of extensive diaries are in the Special Collections Department of the Perkins Library at Duke University. She has taught all forms of creative writing since 1974, through libraries, in continuing education programs, and on her own. She taught Freshman English 2004-2007 at St. Augustine’s College in Raleigh. She does free lance editing for creative writers and offers workshops.
Between 1990 and 2007 she visited Kostroma, Russia, five times, teaching American literature at Kostroma University in 1995 and giving a paper to a Kostroma University Literature Conference in March 2007. She worked on five exchange visits, as well as cooperative publishing with Kostroma writers and exhibits of their artists. She’s active in environmental and community issues in Chatham County.
Judy lives and farms in Moncure, N.C., near Jordan Lake. Her blog, postmenopausalzest.blogspot.com often has reviews and interviews featuring contemporary mystery writers.

Where to find Judy Hogan online 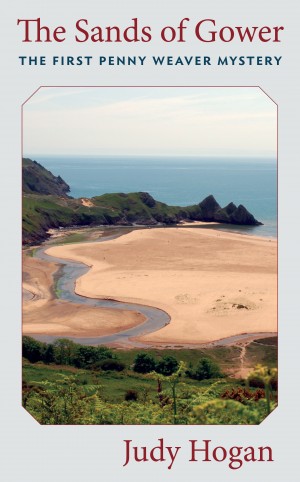 The Sands of Gower: The First Penny Weaver Mystery by Judy Hogan
Price: $2.99 USD. Words: 70,230. Language: English. Published: December 1, 2015. Categories: Fiction » Mystery & detective » Amateur sleuth, Fiction » Romance » Action/adventure
Penny Weaver, luxuriating in her two-month vacation at a B &B in Wales, is disturbed by the murder of a German guest. In the process of solving the crime, Penny and Detective Inspector Kenneth Morgan are powerfully attracted. This, plus the British post-World War II continuing distrust of the Germans complicates their investigation.

You have subscribed to alerts for Judy Hogan.

You have been added to Judy Hogan's favorite list.

You can also sign-up to receive email notifications whenever Judy Hogan releases a new book.