What's the story behind your latest book?
A CUT-THROAT BUSINESS is the third novel in the CHASTITY FLAME series. Because she's exploring her first stable relationship, I wanted to move the focus from her sexual shenanigans to emphasise even more the thrills and suspense. So she's facing two dangerous men, not only at the same time, but they end up ganging up on her.
What are you working on next?
I just finished another crime-related novel, WHITE RABBIT, which has a slightly supernatural element as well as a noirish feel. I have a few non-fiction projects to work on then I have to choose between a novel that's a ghost story and another that's based on a medieval romance. Maybe I'll just work on both at once (as usual).
Read more of this interview.

Where to find K. A. Laity online 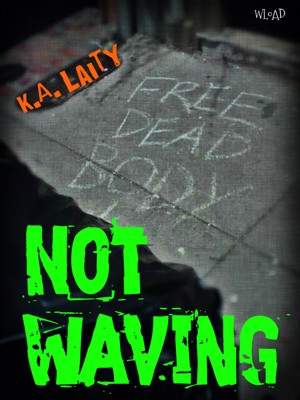 Not Waving by K. A. Laity
Price: $3.99 USD. Words: 57,470. Language: English. Published: April 27, 2013. Categories: Fiction » Coming of age, Fiction » Plays & Screenplays » American
It's the shiny happy 80s in Los Angeles, but Vida's mood couldn't be blacker. Never mind her writer's block, recent suicide attempt or the painful scrutiny of her colleagues, there's drinking to be done! When a cut-rate psychic releases a recurring nightmare, Vida decides it's time for a Vegas road trip. May the gods help anyone in her path...

You have subscribed to alerts for K. A. Laity.

You have been added to K. A. Laity's favorite list.

You can also sign-up to receive email notifications whenever K. A. Laity releases a new book.