Seven years ago Holocaust survivor Joe Rubinstein told author Nancy Sprowell Geise that he would never publicly share his experiences at Auschwitz and several other of the most notorious Nazi concentration camps. Two years ago he changed his mind.

When Nancy began writing Joe’s story, she had no idea the impact it would have on her life as she immersed herself in Joe’s world and his remarkable journey of survival and triumph.

Nancy Sprowell Geise was raised in Ames, Iowa, and is a graduate of Iowa State University. She and her husband, Doran, have lived in Austin, Texas; Fort Collins, Colorado; and Topeka, Kansas. they have three grown daughters.

Nancy divides her time between writing and speaking engagements.Her hilarious and moving life experiences provide great fodder for her writing and storytelling endeavors.

Where to find Nancy Geise online 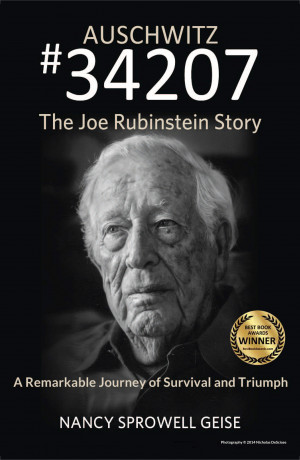 Seventy years ago Joe Rubinstein walked out of a Nazi concentration camp. Until now, his story has been hidden from the world. Shortly before dawn on a frigid morning in Radom, Poland, German soldiers forced twenty-one year-old Icek “Joe” Rubinsztejn onto a crowded, open-air truck. The next day, several around him were dead. From there, things got worse for young Joe—much worse.

You have subscribed to Smashwords Alerts new release notifications for Nancy Geise.

You have been added to Nancy Geise's favorite list.

You can also sign-up to receive email notifications whenever Nancy Geise releases a new book.