With a love of writing, Stephen focused on screenwriting. He received accolades from Creative Screenwriting Magazine, Writer’s Digest, and the Screenwriting Expo. He co-wrote a script for a proposed Batman film that was in consideration at Warner Bros., but was eventually passed over in favor of the reboot “Batman Begins.” IFC listed his effort as one of the seven best unproduced Batman screenplays.

He has had a varied career in film production and in the private sector. Among the dozen short films he wrote, directed, and/or produced, several played in film festivals around the world. He has worked on video projects for Walt Disney World and Lockheed Martin, as well as winning three Addy Awards for commercials he produced and directed. He has worked in theater, both onstage and behind the scenes as director and technical director, and lent his screenwriting skills to the Blue Cat Screenwriting Competition as a contest judge. Most recently, he appeared as a background performer in the feature films Jurassic World and The Fantastic Four. If you don’t blink, you might see him. Since 2013, he has also served as the programming director for Pensacon: Pensacola Comic Con, where he also coordinates the Pensacon Short Film Festival.

Short stories have always been a creative outlet for him, so he finally decided to publish an anthology of stories he wrote entitled “Portals of the Mind.” He has plans for another collection and possibly some novels. His favorite genres are adventure, science fiction, horror, fantasy, and suspense–basically anything that sparks his imagination. His favorite authors are Stephen King, Piers Anthony, Orson Scott Card, Alan Dean Foster, Tad Williams, Caleb Carr, Ray Bradbury, and Agatha Christie.

What do you read for pleasure?
I read everything by Stephen King and as much as I can by Orson Scott Card, Tad Williams, Caleb Carr, Victor Gischler, and Agatha Christie.
What is your e-reading device of choice?
I use my computer and my iPhone when I have to read electronically.
Read more of this interview.

Where to find Stephen Wise online 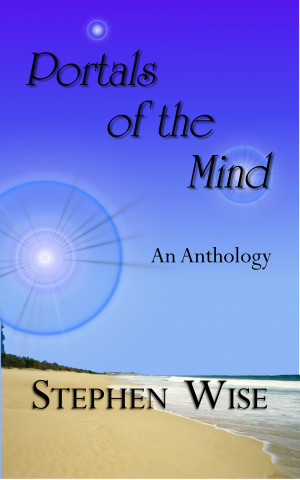 Portals of the Mind by Stephen Wise
Price: $2.99 USD. Words: 38,670. Language: English. Published: January 20, 2017. Categories: Fiction » Anthologies » Short stories - single author
This anthology contains a mixture of short stories and one poem from a variety of genres including science fiction, horror, fantasy, western, and humor. Come along for the ride, as you never know what to expect next.

You have subscribed to Smashwords Alerts new release notifications for Stephen Wise.

You have been added to Stephen Wise's favorite list.

You can also sign-up to receive email notifications whenever Stephen Wise releases a new book.