A child of the 80s, Joshua Blum, like many other people, remembers wishing he had Marty McFly's hoverboard from "Back to the Future 2" to ride to and from school. For awhile, he wanted to be an American Indian hunter and spent many a misspent day making bows and arrows out of tree branches, ultimately leading to a love of archery which continues to this day. After entering that penal colony known as middle school, he decided that he ought to learn to defend himself, leading to the wide world of martial arts and lots and lots of push-ups, both of which he enjoys to this day.

All of these elements were inspirations for aspects of "The Thirteenth Hour," which he wrote after finishing high school and edited little by little until the present day - in effect growing up with the characters. During this time, he was educated at Princeton and Penn State Universities. In total, he estimates having spent 23 years of his life in school (give or take). Despite that rap sheet, he still enjoys learning new things. He credits his mother for instilling in him a love of literature, music, and yard sales. He credits his father for teaching him to do, you know, manly things, like hit a baseball, ride a bike without falling over, and most importantly, never give up on the important things in life. He credits his younger brother for helping him stay young at heart.

He currently enjoys spending time with his wife and daughter. Although not surprising given the decade in which he grew up, he still enjoys breakdancing, though he will admit the bruises take longer to go away now that he can no longer consider himself a young adult. He hopes to forever avoid corporate middle management and is currently at work on a graphic novel for adolescents as well as a sequel to "The Thirteenth Hour." He hopes it does not take sixteen years to finish.

Where to find Joshua Blum online 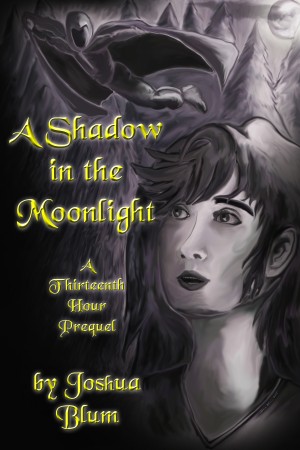 A novelette about a hunter who accidentally interrupts a spell which turns him into a living shadow, only able to venture into the world by night, unable to interact with others and doomed to spend the rest of eternity hunting a ghost-like deer he can never kill. Help and danger collide when he encounters an injured runaway, whom he decides to help.

You have subscribed to alerts for Joshua Blum.

You have been added to Joshua Blum's favorite list.

You can also sign-up to receive email notifications whenever Joshua Blum releases a new book.