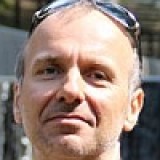 Born: Szczecin, Poland, 1965. Author of one book.
Until 2009 a worker and cranes operator in metallurgical plants,
currently a producer of cartographic animations.
Publishing access: resolved, but coincidental.
Quite jumbled and unexciting life story.
In 1999, excluded from the Pentecostal Church in Frombork
for reasons that were never given to him.
Twice married.

Do you consider yourself a patriot?
Most of all, I feel that I am a human being of flesh and blood, placed in a specific social, civilizational and cultural setting. Without this feeling, my address couldn't have happened. Because, however, I have made serious revisions and revaluations in my life, the convictions shaping my patriotism have also undergone changes. Thus, today it has little in common with the things that are usually ascribed to the foundation of nationality in every country - not only Poland.

I generally consider my country destitute, stupefied by its idolatry, arrogance and foolishness, badly ruled and venal. I also think that the characteristics that are the object of the pride of its inhabitants are disgraceful and degrading to human condition. Its soothsayers are mythomaniacs and artsy dreamers, and its rulers are moral and spiritual weaklings - unfeeling, with the breath of murderous tyranny behind their backs and a disgusting sense of humor. I know that I am isolated in my impressions, but I am in no way an absolute exception.

I am worried and angered by the spiritual state of my nation, but I can't act nor speak against the truth - I only have the limited right to defend my own convictions. It is limited because in my own country I don't count among personages who are readily entertained and asked about their opinions. Here, I am only granted the troublesome status of a "persona non grata" and the attentive readers of the Bible know that well.

But in my opinion, the measure of patriotism isn't the attachment to the existing values and traditions, but rather to those supporting the value of human condition regardless of the time and place given to itself. It follows from the insight that was given me that my nation strongly opposes them (and it is in no way an exception in doing so) and that this opposition will be very costly for my compatriots - not because their imagination is poor, but because they play with real fire and real power from the vision and might of which they have been separated since the dawn of Polish history by shavelings' boons and ages of ignorance overconfident in its own strength and reason.

Even as to a patriot, it is only becoming to me to openly give the lie to their vain hopes and illusions - not at all because they're vain, but because mine grew out of them because of a strength unknown to Poles. If I wasn't a patriot, I would have remained silent about them. I am and I feel Polish to the bone - I just don't like Mickiewicz, Piłsudski, Wałęsa, Wojtyła and a couple of other figures that are commonly associated with "Polishness".
The formula of the publication is original - there are no known models for it in the history of writing. What are the main objectives of your working decisions?
The front matter of the book presents them quite briefly and factually. Their priority is the reconstruction of the gospel testimonies concerning vital precepts of spiritual life. It assumes the existence of a need to revalue certain exegetical degenerations, because they distort the image of the Originator of Christian faith - being thus very harmful (worse than a strong poison to the body) not only to spiritual growth, but above all to the soil in which the growth happens.

In most cases it is difficult to question the validity of this assumption, because it is based on the factual incompatibility of the literal gospel record with the propagandistic and doctrinal one. It is thus enough to take a good, attentive look at the facts pointed out by me to hear the grinding of the infernal machinery. Still, to most people it won't be enough, and the book is, in its intent, a point of reference such as a lighthouse to a shipwreck survivor and not such as a McDonald's neon at the side of a busy highway. Thus, the meaning of significant differences in the choice of appropriate means of expression should be obvious here. In a word, it is rather a survival manual than a menu for those who like raw beefsteaks and rather a tuning fork than the echo of Mozart's concerts.

We don't advertise the truth here: we don't offer a prescription for life's troubles or successes, we don't tickle palates nor satisfy exquisite tastes. The focus of the investigation procedures and the conclusions drawn from them is set on the issue - cardinal to faith - of obedience to the will of its Originator: "If you don't know his will, you won't be able to persevere in it. But if you insist on something that openly insults it, you simply don't stand a slightest chance for heavenly discounts and privileges."

Thus, certain linguistic acrobatics in the book serve the "retraining", re-practicing of the Reader's will so that it would be able to voluntarily measure itself against the Lord's yoke, the taking upon of which has been discouraged for centuries by publicators and spiritual scum of various sorts with admirable success.

In the publication, I don't deal with politics, social problems or the evaluation of cultural or civilizational achievements of mankind - I even discourage drawing from riches that don't serve the knowledge of the truth of the sources of knowledge. Instead, I encourage a greater trust in the lie-damaged façade of the biblical testimony, because the goal of the enemies of the truth - especially the enlightened ones - is the weakening of the readers' attention and focusing it on things that don't matter on the narrow path of faith and the undermining of the value of commonsense reflection on subjects not assigned by shavelings or the equally dissolute and depleted media.

The role of the linguistic means and the unsophisticated literary contrivances is the focusing of attention on the main thrust of the gospel message, showing its internal connections, discourse norms and the style and weight of the references of its crown witnesses. The theatricals serve the exposition of the dissonance between those hard norms and the contemporary evangelistic practice - soft, psychologizing, importunate, twisting itself around the neck and only nominally Christian.

It isn't entirely true that libraries lack the models for my speech - it isn't originality anyway that is the strength of this testimony. It draws heavily from the depths of well-known springs - it only drives away disturbers who can't afford to face the truth. One can't learn anything good from me if one doesn't believe me - I have taken care of that, like the Galilean took care of that in his time.
Read more of this interview.

Where to find Paweł Zelwan online 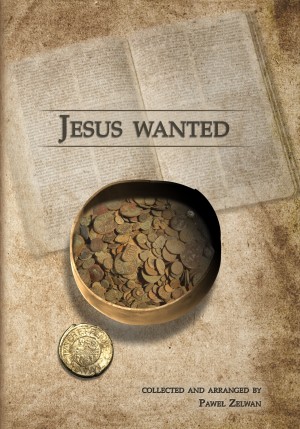 Jesus Wanted by Paweł Zelwan
Price: $9.00 USD. Words: 67,810. Language: American English. Published: June 9, 2016. Categories: Fiction » Christian » Contemporary, Essay » Literature
Concentrating in his novelized lectures mainly on the well-known parables of Jesus, the author is trying to expose the absurdity of the concepts behind the generally accepted interpretations of the Galilean’s puzzling statements. It is a book for those who value their convictions, that is to say, for those who seek a solid ground for them.

You have subscribed to alerts for Paweł Zelwan.

You have been added to Paweł Zelwan's favorite list.

You can also sign-up to receive email notifications whenever Paweł Zelwan releases a new book.