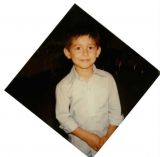 His most current work is "Emily Martin," book 3 of the Rumbling Heart series. Interestingly enough, Richard says that the idea for the series came to him in a dream.

"I know people always say stuff like that, that their idea is like a dream come true, but in my case, it actually is. The original idea came about after a dream I had about a woman I'd never met before. At first, I wasn't sure who she was or why she was there. After waking up, I thought about the dream constantly; so much so that I kept having it over and over again. Over time, it changed and I began to have different variations of the same dream. I decided to write it all down, hoping it would help me figure out what I was trying to tell myself. I figured I could just write and see where it took me, but never did I think it would turn into a full novel. Before I knew it, I'd written over 60 pages and decided to just go all out. Within a few months, I had the first draft of my book. A few months later, after several editing sessions, I released it, thinking that would be that, but the dream variations kept coming so I wrote more. Even today, having just finished the third book of the series, I'm still having those dreams and they don't seem to want to stop."

Richard has stated that the fourth book in the series will be the last, regardless of whether he is still having those dreams or not.

His story "Last Night" is currently being developed into a short film. Oddly enough, the story itself was something Richard states he did on a whim after a conversation he had with a few people on Twitter.

"People kept saying that they thought writing 2000 words in a single sitting was absolutely amazing. I thought it was a good start, but nothing incredible. I told them I was used to dishing out 8k to 12k words in a single sitting and they openly scoffed at me, saying that wasn't possible. I essentially made a bet with myself: I would write a short story, complete with edits and a viable plot as quickly as I could. Within 90 minutes, I'd written over 5k words. I just kept typing and did not stop. In fact, the end result wasn't exactly what my original idea was. I just let the story write itself. I reread it and thought it was solid and did the necessary edits and grammar checks. In less than two and a half hours, I had a full fledged story, completely edited. I never thought it was the most amazing thing in the world, but I felt it was solid enough to garner some attention not because I'd written it so fast, but because I thought the story and ending would make people think. It turned out to be a somewhat cerebral story and while the ending shocked a few people, it still made them think which is what I wanted."

After spending about 10 years in Austin, TX, he has relocated to his old stomping grounds of Corpus Christi, TX.

Where to find Richard Allen online

You have subscribed to alerts for Richard Allen.

You have been added to Richard Allen's favorite list.

You can also sign-up to receive email notifications whenever Richard Allen releases a new book.