My name is Carol Marrs Phipps and I am a teacher turned author. I was born in Missouri, grew up mostly in Illinois and currently reside in Illinois. My book, Elf Killers, which I wrote with my co-author and fantastic husband, Tom Phipps, was released by Hellfire Publishing on July 15. It is available as both an ebook and paperback and is now currently Indie Publishedby Tom and me. We now also have the first four books in our Epic Fantasy series Heart of the Staff available in eBook and paperback formats available to purchase.

Tom and I spent the lion's-share of our teaching careers in the Southwest U.S. (Arizona, New Mexico and Nevada) on different Native American Reservations. I believe we learned as much from our students as they did from us and a large number of them became the first dedicated fans of our stories. We are currently full-time writers.

Not long after Tom and I married, I discovered to my joy, that he, too, loved to write. We have been writing together ever since. We are currently working on the 5th book in our epic fantasy series, Heart of the Staff, and have already completed the first four books. We expect to complete the saga with another one or two books. The first four books of this series are: Good Sister, Bad Sister, The Collector Witch, Stone Heart and The Burgeoning. We hope to publish the 5th book sometime in January 2013.

Heart of the Staff by Carol Marrs Phipps
& Tom Phipps 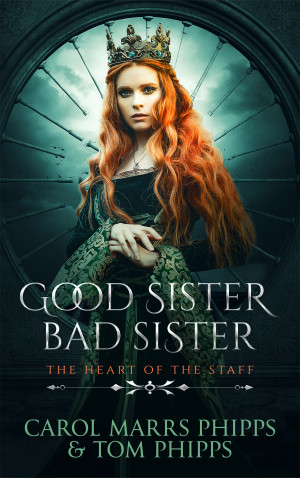 Minuet Dewin raised her half sister Leeuh. For many years, Minuet is Leeuh's champion. As time passes, Leeuh becomes awful at every turn. Whilst undoing her dangerous pranks, Minuet becomes the target of her hatred and jealousy. Suddenly Leeuh vanishes and returns years later, sweet as she always should have been. Should Minuet trust her, or will it be the very death of her?

You have subscribed to alerts for Carol Marrs Phipps.

You have been added to Carol Marrs Phipps's favorite list.

You can also sign-up to receive email notifications whenever Carol Marrs Phipps releases a new book.