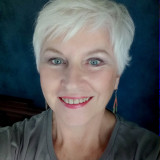 48 readers have added this author as a 'Favorite Author'.

Hello - thanks for coming to see me. I love words, and I use them to make the world a happier place by creating people who are perfect for each other – although maybe they can’t see that to start with!

I began writing at my local radio station in New Zealand. After living in Italy and London I returned home and worked in TV, radio again, several advertising agencies, and then spent happy years as a retail ad manager. Totally hooked on fabrics, I followed this by surprising everyone and going into business with my husband as a curtain installer and working for some of the capital city’s top designers. Good for my body, and it freed up my brain to write fiction. In twenty years I haven’t fallen off my ladder once through drifting into romantic dreams, but I’ve certainly seen many beautiful homes and met wonderful people, and I may just have stolen glimpses of them for the books. (I didn’t say that, did I?)

If you love contemporary romance in exotic settings, that’s what I write. They're mostly sexy stories about couples who fall in love and into bed along the way, just like real people do. I’m the author of sixteen novels, three of which were finalists in New Zealand’s Clendon Award. Each can be read as a stand-alone, but some make up linked series. I hope you enjoy them all.

My most recent novels are billionaire beach stories about the wealthy Wynn family in Scarlet Bay - Summer Sparks, Summer Secrets, and Summer Spice.

See more at http://www.krispearson.com - and sign up for my occasional newsletter while you're there. Then you'll be able to download my bear shifter novella - available nowhere else.

What is the greatest joy of writing for you?
Getting to know my characters. I don't start writing until I have the entire book in my head - and by this I mean the storyline. I simply can't make it work by plotting a book out scene by scene on paper or on the screen. I like to have my 'brain-outline' and then dive in to see what's really going to happen. I'm often amazed at what my characters do - without my permission... They turn the tables on me all the time. I'm sometimes very surprised how they'll set something up for me that turns out to have relevance much later in the story.
How has Smashwords contributed to your success?
Smashwords has made my books available in different e-book stores, so I'm able to reach more people. The iBookstores in particular have been a wonderful addition.
Read more of this interview.

Where to find Kris Pearson online

You have subscribed to Smashwords Alerts new release notifications for Kris Pearson.

You have been added to Kris Pearson's favorite list.

You can also sign-up to receive email notifications whenever Kris Pearson releases a new book.