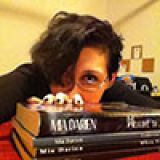 Mia Darien is an indie author of speculative fiction, and a New England Yankee transplanted into Alabama clay. No matter her geography, she continues to stubbornly and rebelliously live the life of her choosing along with her family and pets. She doesn't miss the snow.

Where to find Mia Darien online

You have subscribed to alerts for Mia Darien.

You have been added to Mia Darien's favorite list.

You can also sign-up to receive email notifications whenever Mia Darien releases a new book.