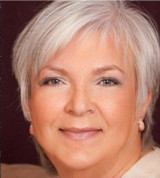 43 readers have added this author as a 'Favorite Author'.

Author of 20 Historical Romances and one contemp, my first book, China Rose, was published in 1984. Since then my historical romances have consistently appear on the USA Today list. I have been honored to be the recipient of multiple awards from Romantic Times, including 2 Lifetime Achievement awards, Storyteller of the Year, Medieval of the Year, Swashbuckler of the Year, as well as having been awarded one of a very few five star reviews handed out by Kathe Robin for The Blood of Roses. The Iron Rose was also named as one of the seven best Fiction books of the year by Publishers Weekly.

Describe your desk
My desk has been described as organized chaos. I am pretty much the only one who knows my filing system and therefore the only one who can find something. The desk itself was custom built for my height and because I have recurring back problems, but it was also built to fill the length of one wall, roughly sixteen feet; with three banks of deep drawers. When I moved and had to downsize, my search for a new house included space for my desk and the matching wall unit of bookshelves which is also sixteen feet by nine feet. I found a house that gave me the space I needed to set up my office again, but now I have no dining room and the desk had to be shortened by three feet *s*
Where did you grow up, and how did this influence your writing?
I was born and raised in Toronto, Ontario. My parents moved us out of the city and into the suburbs when I was six years old so I have never been one for crowded cities and busy streets. Each time the area began to expand with houses and busy traffic, I have moved further and further north out of the greater Toronto area. I currently live in a small town which fits the cliche, if you blink you miss it, but I can still go for a short walk and see horses in the fields and chickens in back yards. Writing is a solitary business and, for me, at any rate, distractions too easily pull me out of the mood to write. Living away from hustle and bustle always helped focus me, and it was not unusual for me to work sixteen hours a day, seven days a week. I recall being invited out for dinner to a friend's house...and resenting the need to leave my medieval characters halfway into a battle. But the hubby prevailed and I went. When I arrived everyone was sitting in the family room glued to the TV watching in dead silence as the cameras were following a white Bronco on the freeway. Twelve pairs of eyes stared at me in disbelief when I asked what was going on. Yeah. That's how isolated a writer can be.
Read more of this interview.

Where to find Marsha Canham online 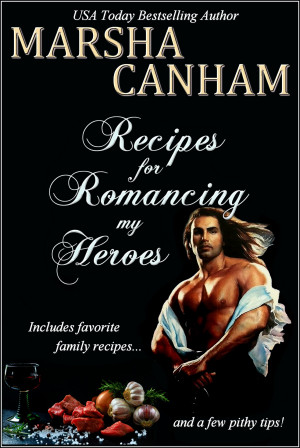 Recipes for Romancing my Heroes by Marsha Canham
Price: $4.99 USD. Words: 56,530. Language: English. Published: June 15, 2018. Categories: Nonfiction » Cooking, Food, Wine, Spirits » Entertaining
What would I serve the heroes in my romance novels if they came to dinner? The mere idea of having all of them sitting around the dinner table eating, chatting, comparing stories on how they inspired me to write this or that about them… well, it makes my heart beat a little faster. And isn't that what all heroes, not just the ones in romance novels, should do? Bon appètit!

You have subscribed to Smashwords Alerts new release notifications for Marsha Canham.