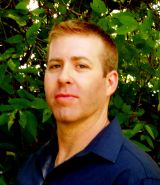 43 readers have added this author as a 'Favorite Author'.

Travis Luedke is a husband, father, and author of Urban Fantasy Thriller, Paranormal Romance, Contemporary Fantasy, Young Adult Fiction, and Sci-fi. He is currently catching a 3rd degree sunburn in San Antonio, Texas, and loving every minute of it.

As the author of the Nightlife Series novels, Travis lives very vicariously through his writings. He invites you to enjoy his macabre flights of fancy, but be warned: The Nightlife Series is violent, sexy, and occasionally violently sexy.

Where to find Travis Luedke online

You have subscribed to alerts for Travis Luedke.

You have been added to Travis Luedke's favorite list.

You can also sign-up to receive email notifications whenever Travis Luedke releases a new book.